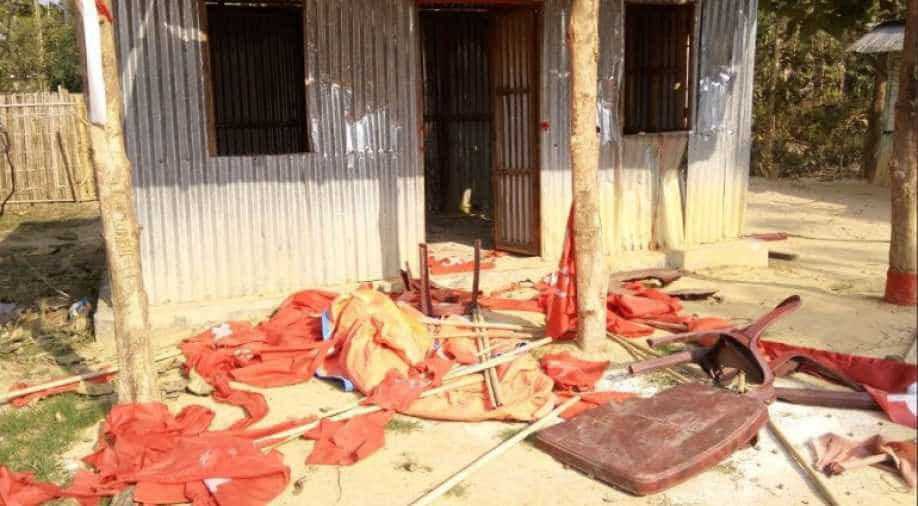 On Monday, a statue of Vladimir Lenin was brought down at the College Square in the town of Belonia. ||BJP workers vandalised the statue amid roars of 'Bharat Mata ki jai', media reports said

Following a spurt in the incidents of violence in Tripura after the state assembly elections, Home Minister Rajnath Singh today spoke to Tripura Governor Tathagata Roy and Director General of Police Akhil Kumar Shukla, asking them to check violence till a new government is installed.

Section 144, which prohibits public gatherings, has been imposed in several violence-affected areas in the state.

After 25 years, Tripura witnessed a change in government with the BJP and its ally, the People's Front of Tripura (IPFT) winning 43 of the 59 seats in the state assembly elections.

The Tripura Police said on Monday that it had received four complaints of "post-poll" violence from various parts of the state since Sunday.

"The cases include arson at two CPI(M) offices in the Sidhai area in West Tripura district, 25 km from here, and clashes between CPI(M) and BJP supporters at Kadamtala in North Tripura district, 140km from here,"
Superintendent of Police (Control) Pradip De said, adding that no one had been arrested so far.

The BJP has warned its leaders and supporters of "stern" action if they indulged in "post-poll violence" in Tripura.

BJP Vice President Subal Bhowmick said on Monday that a section of unidentified BJP supporters, who migrated from the CPI(M), were creating unrest in parts of the state.

"Anyone found to be involved in post-poll violence would be immediately expelled and legal action will be initiated against them," he said.

The CPI(M) alleged that the supporters and activists of the BJP-IPFT alliance were terrorizing its workers and burning party offices since the announcement of poll results on March 3.

CPI(M) office secretary Haripada Das said over 240 people were injured in attacks on party offices, offices of Left trade unions and homes of prominent leaders in the last 48 hours (since Sunday).

Bhowmick alleged that the CPI(M) activists, too, "assaulted" 49 of its party supporters, 17 of whom had to be hospitalised.