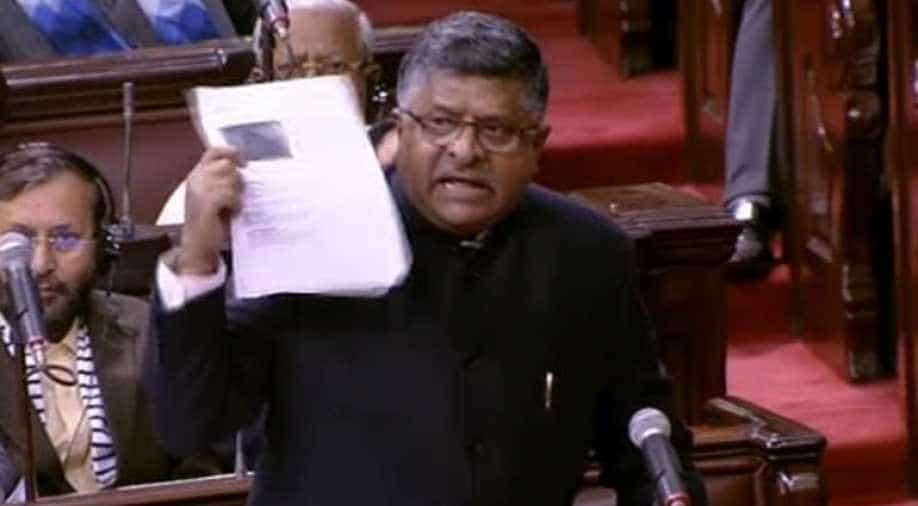 The Triple Talaq Bill was tabled in Rajya Sabha on Wednesday. Photograph:( ANI )

Disruptions followed as soon as the triple talaq Bill was tabled in Rajya Sabha on Wednesday. The Speaker adjourned the Upper House till 11 am Thursday within a few hours as the Opposition pressed to the government to send the bill to the Select Committee.

Rajya Sabha adjourned till 11 am, tomorrow after continued pandemonium over #TripleTalaqBill pic.twitter.com/U5nKC0BSG9

As Union Law Minister Ravi Shankar Prasad tabled the bill in Rajya Sabha, Congress immediately moved a resolution to send the bill to the standing committee.

Finance minister Arun Jaitley said it was an "invalid resolution".

Jaitley asserted that the motion should have been submitted a day earlier, adding that a motion has to be given at least 24 hours in advance.

The house is taken by surprise that a motion is suddenly moved, it has not been submitted a day before. The motion has to be give at least 24 hours in advance: Arun Jaitley on Anand Sharma's notice #TripleTalaqBill pic.twitter.com/GbQZw3Nskk

The whole country is watching that in the other house you supported the bill and in this house you are trying to derail the bill: Arun Jaitley in Rajya Sabha #TripleTalaqBill

Jaitley said that the motion should not be referred to Select Committee. Citing urgency, he said that the legislature must act with a sense of responsibility.

Reason why it should not be referred (to select committee) is that when the practice was declared unconstitutional, 2 of the judges held it as unfair & used their extraordinary power to suspend it for 6 months, which expire on 22 Feb: Arun Jaitley in RS #TripleTalaqBill 1/2

Judges said, 'we are now suspending it for 6 months & we beseech all parties, therefore within this period come out with apt legislation.' So, there is an urgency that country expects from Parl. Legislature must act with sense of responsibility: Jaitley in RS #TripleTalaqBill 2/2

While addressing the Rajya Sabha, Ravi Shankar Prasad cited a case of the latest victim of triple talaq in Moradabad.

He said,"Even after passage of Triple Talaq in Lok Sabha the practice is continuing, a woman in Moradabad was given triple talaq over dowry."

Even after passage of #TripleTalaqBill in Lok Sabha the practice is continuing, a woman in Moradabad was given #TripleTalaq over dowry: Law Minister RS Prasad in Rajya Sabha pic.twitter.com/otec2iq6GE

The Congress, Left, and the AIADMK and DMK have supported the bill but have called for the modifications of certain provisions, claiming the bill could upset the sentiments of Muslim women.

The Left parties, which have had consultations with the Congress in the past week, have asked that the bill "be referred to a select committee".