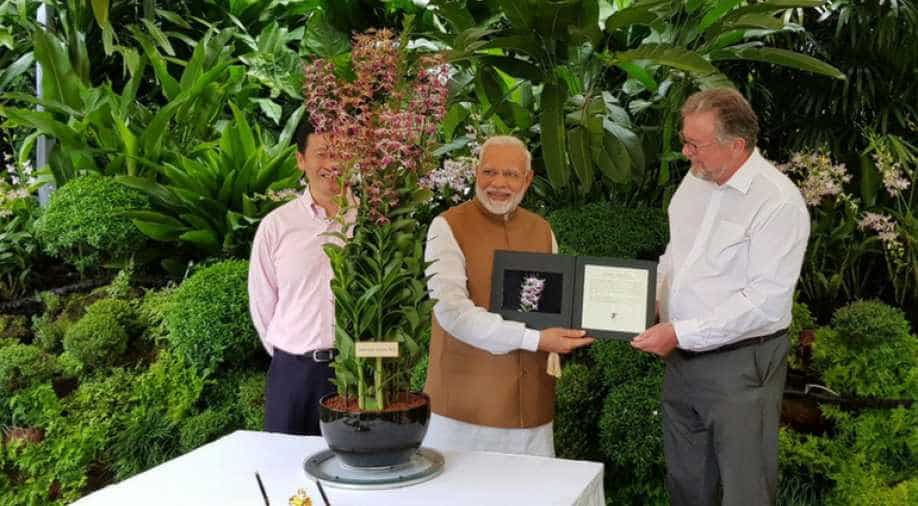 Modi has an orchid named after him in Singapore. The orchid was named 'Dendrobrium Narendra Modi'. Photograph:(Others)
Follow Us

An orchid was named after Prime Minister Narendra Modi to mark his visit to the National Orchid Garden of Singapore on Saturday. Modi is here on a three-day visit.

"Dendrobrium Narendra Modi - an orchid named after PM @narendramodi on the occasion of his visit to the National Orchid Garden in Singapore," External Affairs Ministry Spokesperson Raveesh Kumar tweeted.

"A strong and robust tropical orchid which produces upright inflorences up to 38 cm long with 14-20 well-arranged flowers," he said.

The distinguished and well twisted petals of the orchid are mahogany, while sepals are reddish brown and lined with a fine margin. They are beautifully complimented with an attractive dark purple lip.

Built in 1827, the temple was constructed for worship by immigrants from the Nagapatnam and Cuddalore districts of South India. The temple is dedicated to Goddess Mariamman, known for her power in curing epidemic illnesses and diseases. The temple is located in the heart of Chinatown.

He also visited Chulia mosque in Chinatown which was built by Chulia Muslim merchants from India's Coromandal Coast under the leadership of Anser Sahib. Demonstrating the age-old people-to-people contact between our two countries. This is one of the earliest mosques in Singapore. The mosque was established in 1826.