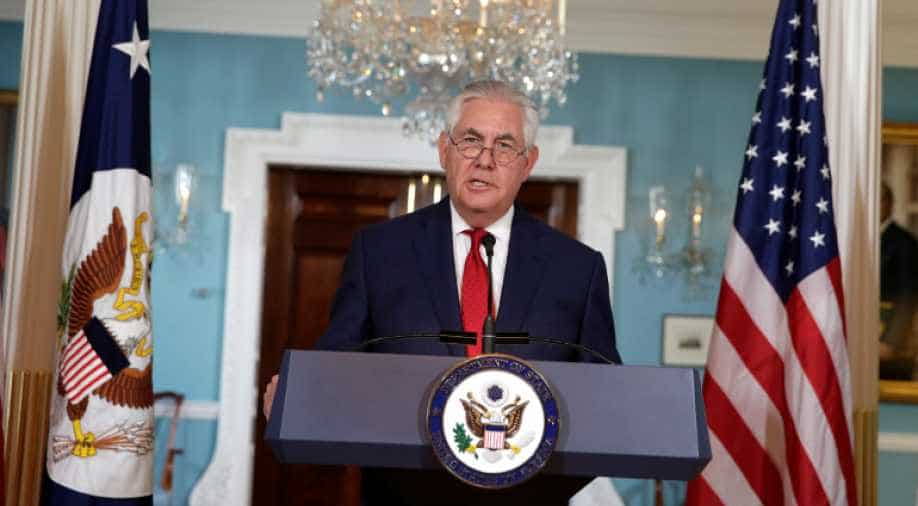 Speaking at the Centre for Strategic and International Studies in Washinton, Tillerson said India and US defense ties are growing. Photograph:( Reuters )

India has welcomed US Secretary of State Rex Tillerson’s statement where he called upon India to "take leadership role in regional security".

Speaking at the Centre for Strategic and International Studies in Washington on Wednesday, Tillerson had said, "Security and stability is important for economic growth. India and the US are working towards shared security goals." "India must take leadership role in regional security," he added.

"US Secretary of State Rex Tillerson has made a significant policy statement on India-US relations and its future. He brought out its various strengths and highlighted our shared commitment to a rule-based international order," the Ministry of External Affairs said in a statement on Friday.

We appreciate Tillerson's positive evaluation of the relationship and share his optimism about its future directions, it added.

Tillerson made the remarks ahead of his week-long five-nation tour beginning Saturday which will take him to Pakistan, Saudi Arabia, Qatar and Switzerland apart from India.

Tillerson is scheduled to arrive in New Delhi next week, where he will meet with senior Indian leaders to discuss further strengthening of strategic partnership between India and the US and collaboration on security and prosperity in the Indo-Pacific region.

"The Secretary's visit to India will advance the ambitious agenda laid out by President Trump and Prime Minister Narendra Modi during the Prime Minister's visit to the White House in June," State Department Spokesperson Heather Nauert said.

Tillerson, in the first major foreign policy speech on October 18, said the US is India's "reliable partner" at the world stage in this period of uncertainty and angst, sending a strong signal to side with India amidst China's "provocative actions" in the region.

In the speech, he said the emerging Delhi-Washington strategic partnership stands upon a shared commitment upholding the rule of law, freedom of navigation, universal values and free trade.