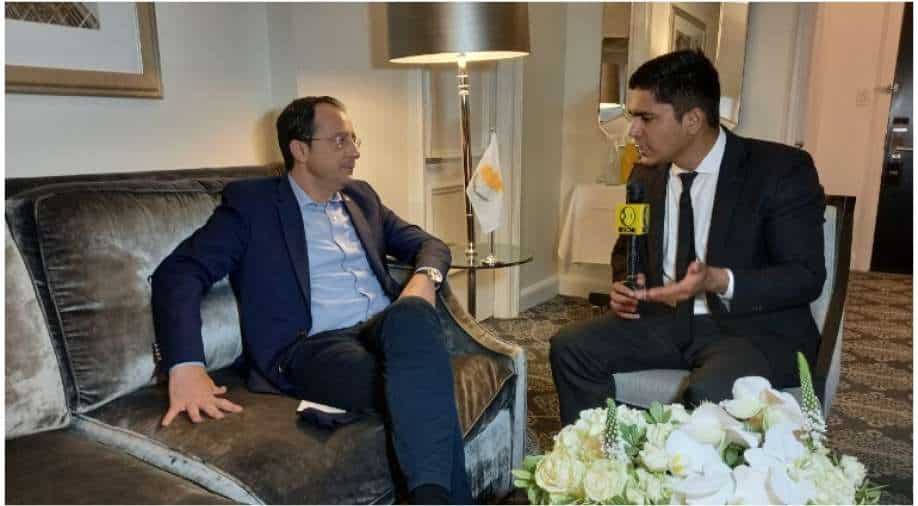 Cypriot foreign minister said the his country can be India's gateway to the European Union. Calling India a pillar of stability he stressed the need for comprehensive relations between India and Europe

Cyprus Foreign Minister Nikos Christodoulides has lauded his country's ties with India calling them "strong strategic, and indispensable" and highlighted how his country can become "gateway for Europe" for Indian businesses and other people to people engagement.

Speaking to WION's Principal Diplomatic Correspondent Sidhant Sibal in New York, Cyprus FM said, "We have excellent relations, based on our strong commitment to international law and rules-based international system". The foreign minister had a bilateral meeting with Indian External Affairs Minister Dr S Jaishankar in New York on the sidelines of the United Nations General Assembly (UNGA). During the meet, FM Nikos extended invite to EAM to visit Cyprus.

The Cyprus FM also slammed Turkey for "militarisation" of its foriegn policy and "violating International law". He thanked India for "active and major" role when Turkey was seen violating United Nations Security council resolutions on Cyprus by opening Varosha. Varosha was once a popular resort town but was abandoned after the 1974 invasion of the Mediterranean island by Turkey.

WION: How will you characterise India Cyprus relations?

Nikos Christodoulides: If I would characterise the relationship between India and Cyprus, I will use 3 words--strong, strategic, and indispensable. Traditionally and historically, we have excellent relations, based on our strong commitment to International Law and rules-based international system. I am very glad; I had the chance to meet my colleague here in New York not only to discuss our bilateral relations but also to work together to enhance our bilateral relations. We exchanged views on regional developments, I have to say, I have been always looking forward to the assessment of my colleague who has a very good knowledge of the region.

Third, we discussed the relationship between European Union and India. Cyprus is a strong supporter of the enhancement of the relationship between Brussels and New Delhi and we need to work together with India, not only on economic and political issues but also, on the region. Because for us, India and EU are pillars of stability in a region of great geo-strategic importance. So, we need to work together with India and I am glad that very recently, we had with us in Portugal, who had the presidency of the EU, our Indian colleague was also there to he gave assessment for the development of the region and how to work together for enhancement of EU-India relations.

WION: How can Cyprus be launch pad for Indian businesses?

WION: You had a meeting with EAM Jaishankar. India and Cyprus are working on many things, we saw conversation on Turkish side not respecting United Nations Security council resolutions..

Nikos Christodoulides: First of all I would like to thank my Indian colleague, I would like to thank Indian govt through our discussions for their active and major role during the recent discussions regarding the Cyprus problem and the Turkish illegal actions in Cyprus. When the issue was discussed at the security council, have to say India's leading role, it was crucial, in order to have positive result from the security council.

It is something that we recognise, it is something we are grateful for. At the same time, recognising the role of India in the region I extended an invitation to my colleague to participate in the regional developments in the eastern Mediterranean and the greater Middle East. Right now, there is an effort from all of the countries of the region, Israel, Cyprus, Greece, Egypt, UAE, Jordan to come together to not only better tackle the challenges in the region but also take advantage of the opportunities of the region. I invite my Indian colleague to participate in this discussion, in these regional discussions, and I believe and I hope that soon India will be part of these regional developments. I know, this is what the countries of the region will like to see.

WION: Turkey has been concern for Cyprus and for India as well. How is it changing the geo-political situation in and around Cyprus?

Nikos Christodoulides: Unfortunately, Turkey's behavior is violating International law, they don't respect international law, they don't respect rules-based international system. Turkey has problem with all its neighbours. It is not only Cyprus-- Greece, Syria, Libya, Iraq, even India. What we want and the message we are sending to Turkey is, we don't exclude any country from our cooperation, we want excellent bilateral relations with all countries. What we need though from turkey is to respect International Law, respect the sovereignty, territorial integrity for the countries of the region. However, we see from Turkish action, the militarisation of the Turkish foreign policy and this an issue of great concern for all the countries in the region.

WION: It doesn't look like Turkey is giving any positive vibes or actions in region, plans to recognise northern Cyprus with Turkish allies like Pakistan trying to give feelers.

Nikos Christodoulides: First of all you are right that we dont see positive vibes from Turkey. We see sometime few positive statements, but we dont see positive actions. We need positive actions. Regarding the issue you raised, recognition of an illegal regime in the north of Cyprus, as you know very well the Security Council was clear that such an action is going to be against International Law, and we expect from all countries of the international system not to proceed with such an action.

WION: Will you again go to United Nations Security council if Turkey is seen violating UNSC resolutions, as it has been?

Nikos Christodoulides: Of course, and actually recent dicussions that took place were because of the illegal actions of Turkey. It was the 3rd time we appealed to Security Council, and if there is a need again, we will do of course and we are looking forward for support from India and we know very well, having in mind that the foreign policy of India is based on International Law, that we will have your support.