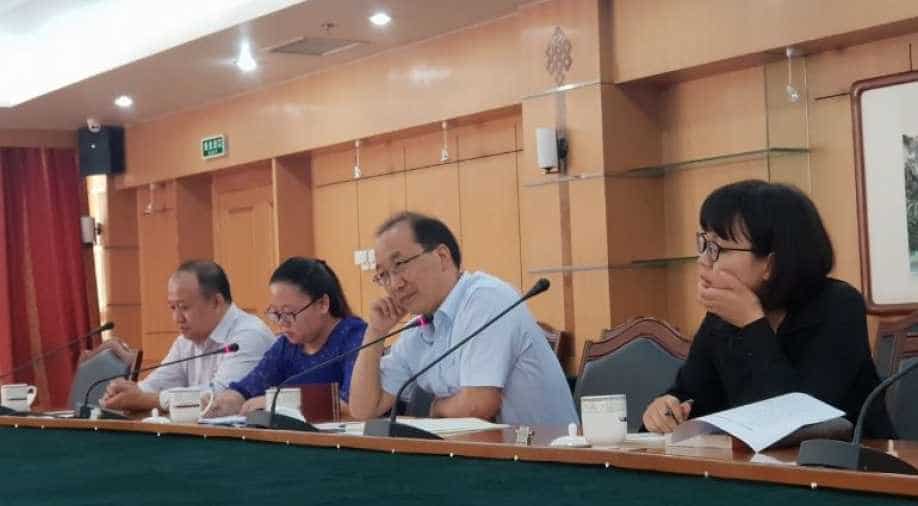 Members of CTRC speaking to media in Beijing. Photograph:( WION )

The current 14th Dalai Lama had fled Tibet after it was invaded by China in 1950s.

Zha Luo, Professor CTRC said, "If Indian government refuse to recognise (next china appointed Dalai Lama) it would be a major political difference that would impact Sino-Indian ties."

Adding further Luo said, "This extreme circumstance may not happen as both China and India are large developing countries and we have shared interest.. and reincarnation of Dalai Lama is important for China, so any friendly country or friends of china would not interfere or meddle."

The current 14th Dalai Lama had fled Tibet after it was invaded by China in 1950s. After him, the Tibetian government in exile will announce the next Dalai Lama but China will also announce its own Dalai Lama using a process of drawing a lot from a golden urn.

"The bottom line, that China wants India to do during the reincarnation process of Dalai Lama, India should respect China's rights to deal with its domestic, political, economic, social, religious affairs, that is the bottom line, mutual respect," said Xiao Jie Assitant fellow in institute of commentary studies of CTRC.

Xiao Jie said, "To choose next Dalai Lama inside China will be more satisfactory to religious feeling."

He explained China government's position saying Tibet government in exile is not a legal religious body but only seeks political independence of Tibet from China and won't be allowed to participate in "reincarnation" process of next Dalai Lama.

Another scholar at the China-backed Think Tank, Liang Junyan who is a Researcher in the institute of historical study reiterating China's stand on Mc Mohan line said, "The British interfered in Tibet... and asked China to sign an illegal treaty."

Mc Mohan line defines the border between India's Arunachal Pradesh and China's Tibet with Beijing not recognising it since according to it Arunachal Pradesh is south Tibet. It was signed between British negotiator Henry McMahon and Tibetian representative in 1914 in Shimla.