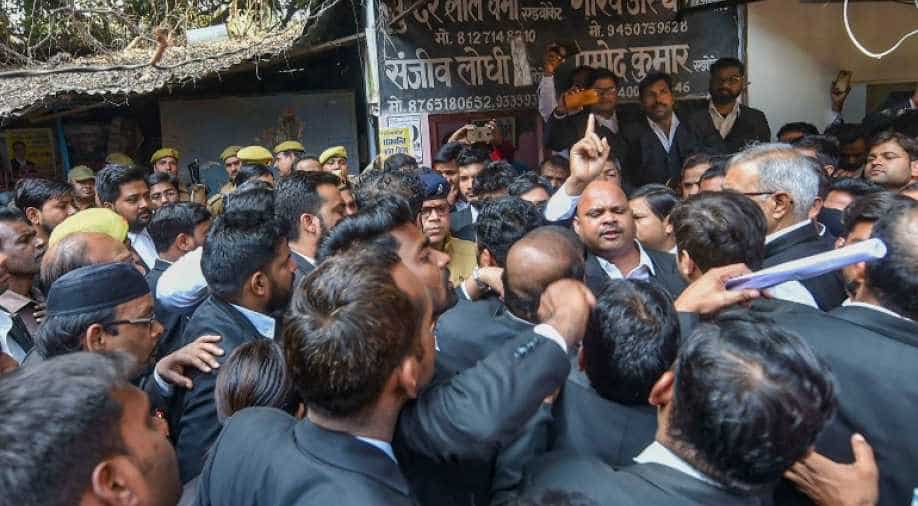 Lawyers in Lucknow protesting after the bomb blast Photograph:( PTI )

At least three lawyers were wounded in a crude bomb blast which exploded outside the Lucknow court on Thursday.

Reportedly, the blast took place outside the chamber of Lucknow Bar Association Joint Secretary Sanjiv Kumar Lodhi. Lodhi claimed he was the target of the attack as he had been complaining about a few judicial officers. He also blamed lawyer Jitu Yadav for the incident.

Lodhi also said about 10 people hurled crude bombs outside his chamber in which two other lawyers were also got injured.

"One bomb exploded but two still lay unexploded," he said.

After the blast, bomb disposal and dog squads have reached the spot to carry out the investigations.

Last month, UP lawyers organised a strike to protest against the recent attacks on them in the state.

The Bar Council of Uttar Pradesh had also asked bar associations to skip work to put pressure on the government to pass legislation to protect lawyers.

Earlier, Lawyer Shekhar Tripathi (32) was beaten to death with sticks by five men in Lucknow on January 7, which fuelled his colleagues who sat with the body at the district collectorate demanding justice.

On December 17, a man was killed and two cops got injured when unidentified assailants opened fire at Bijnore CJM's court.