This is how the world celebrates Holi! 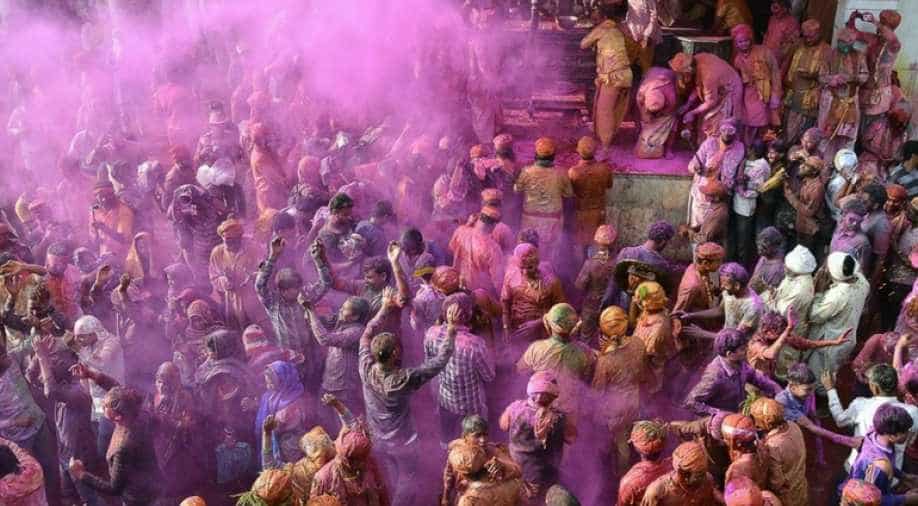 The festival of colours is upon us and its time to bring out your white kurtas, gujjias, gulaals and pichkaaris to go all out during this auspicious day. Although, several parts in India celebrate the festival with absolute rigour, people around the world equally go all out. From Bollywood dances to marathons to the age old water and colour fights, people in these countries are no strangers to the festivities.

This is how some countries celebrate Holi:

Nepal holds a vast majority of Hindu population which is why Holi is a celebrated with much grandeur in the country. In Kathmandu, the streets of Thamel and Durbar Square hold the best celebrations. Children and adults, everyone dedicatedly play Holi to their heart’s content. Durbar Square can be absolutely packed with people whereas the small streets of Thamel are filled with kids looking to sneak up with water-guns and balloons.

Traditional natural dyes were used such as turmeric and sandlewood paste mixed with extracts of Neem, Haldi and Bilva to give the pasts colour.

The presence of Indians in England is widespread, Indians are said to be the second largest ethnic majority in the UK. Major cities like Birmingham, Leicester and Newcastle see people stepping out with spray cans and tons of gulaal. There are Holi parades in the streets. Manchester usually puts up several food stalls and dance sessions, while Redaing will have singing and a Holika play.

One can get a taste of Holi in London, where 'The Colour Run' festival takes place. Participants run in a five-kilometre street, wearing a white shirt and as the colours are sprayed at them they, get covered from head to toe with every kilometre of the course. The event takes place in the cities of London, Manchester, Glasgow and Birmingham.

The Colour Run festival (Others)

The United States also sees a vast majority of Indian population which is why Holi is celebrated across different states with full enthusiasm. A number of festivals are organised throughout the country - one of the biggest colour festivals, "Life In Colour" started out as a college festival in Florida in 2011, later progressing into a worldwide colour party, another famous event is "Colour Music Festival" in Texas.

Religious groups in Utah organise the festival on a big scale to provide a platform to the young to have fun, but in an untainted way. People from all walks of life are welcomed to play with colours to the tunes of music.

Just as the many other major Hindu festivals, the large Indian majority, (about 63 per cent) celebrate Holi with a lot of enthusiasm in the island of Mauritius. Hindus, here duly perform the tradition of Holika Dahan or lighting of bonfire on the eve of Holi and celebrate the victory of good over evil. Next day people revel and play with colours and drench everybody with water jets called pichkaris that are from Mauritian bamboo stalks.

The crowds sing and dance to music, which is accompanied by jhal (cymbals) and dholak (drums). In the evening, people greet each other with tilak and exchange sweet dumplings like gujjia.

This one day in the whole time span of 365 days has the power to leave behind memories to rejoice and fill colour in your life. Not only the those who are in India enjoy this festival of colours wholeheartedly but the Indian Diaspora residing in different parts of the world, equally take pleasure in celebrating this festival of colours in the similar manner.

One such country, where the people of India are present in a quite large numbers, is Australia. Melbourne specifically organizes for the Holi festival event which is the best way for the Indians to quench their desire to be drenched in multi colours. Holi is celebrated in the Victorian capital for it being kaleidoscopic in nature.

There is  a town in Spain that has been celebrating Holi for the past seven years. Sadabell, a town located 20 kilometers north of Barcelona, receives almost 10,000 people from all ethnicities for the Holi festivities. The town doesn’t have a large Indian population, but members from Indian communities in nearby cities like Barcelona, Olot and Llort de Mar stop by.

The most popular one being the "Holi Garden Festival" which termed the brightest festival in Ibiza and goes on throughout the summer, with events taking place as long as the warmth lasts. It stays true to its origins with colour, white outfits, music and food. A huge crowd participates in dances, where choreographed groups perform moves to bhangra and Bollywood beats.

Same as in many parts of the world, Holi is additionally celebrated by individuals having a place with the Hindu people group living in UAE. The festival there in UAE incorporates trading welcome by conveying blessings and desserts with each other, heaving different sorts of hues on each other both in fluid and powder shape. Individuals move on the colorful Bollywood numbers and numerous conventional Holi melodies. The Indian ostracizes here in UAE, turn out in a greater part, wearing conventional Indian garments; white Kurta Pajama for men and delightful Salwar kamij and sari for ladies.

Alongside the playing with hues individuals in UAE likewise appreciate flavorful Indian dishes which are renowned especially for Holi festivity which incorporate malpuas, gujiya, Puran, dahi vadas, and policy.

Holi is said to have come to Trinidad around 1845 by the Hindus who relocated from Bihar as authoritative workers on the sugarcane field. From that point forward it is being raised each year with incredible eagerness.Hindus in Trinidad and Tobago praise the celebration with hues, tunes, music, and move. An assortment of water hues are blended and splashed on each one of the individuals who take an interest in the festivals, till they end up noticeably unrecognizable. Individuals trade desserts and welcome with each other

A unique sort of people melody called Chowtal is sung throughout the celebration and the music is generally played with just two instruments. The dholak (a hand drum) and the jeera (cymbals or percussion instrument) are the main two instruments utilized. Chowtal tunes are sung rather uproariously and are piercing. Quick paced music welcomes individuals to shake their hips and influence the cadence.

The energetic Gujarati’s and other Indians settled in South Africa have made it a point to keep the custom of observing Holi alive in the nation. They play hues, light blazes called Holika, sing Holi melodies and make joyful.

It might be noticed that South Africa is situated at the southern tip of the landmass of Africa. It had the biggest worker Indian people group on the planet 10 years before the colonisation by the United States of America. Indians record of right around one million in the nation. The vast majority of them are packed in the eastern locales of Natal and Transvaal of the nation. Around 65% are Hindus, 15% Muslims and 20% of Christians live here.

The “Holi Festival of Colors” festival takes place in cape town each year. It is an international festival with dance, music and colours. This two-month festival happens every year at different locations across the world every week of its run. Every year has a different theme. The “Holi One” festival is also one of the famous events in the country.