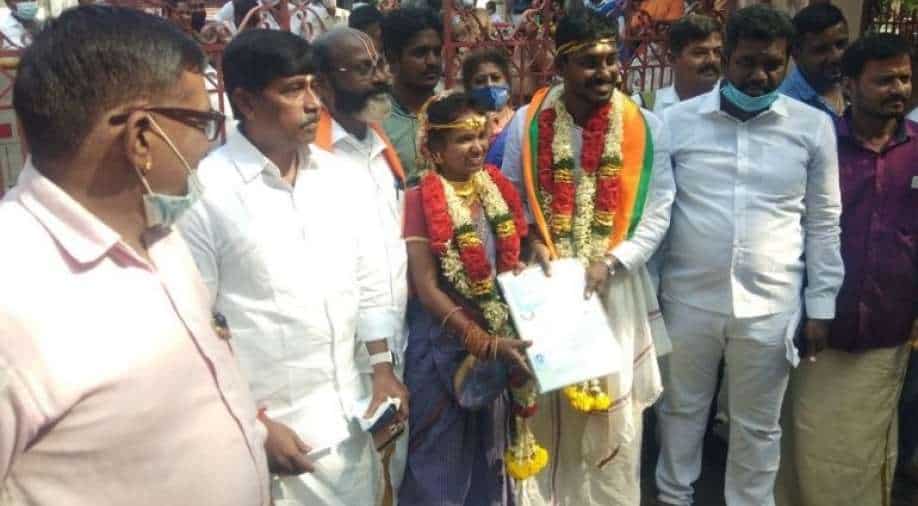 After tying the knot in Tiruvallur, a district adjoining Chennai, the newlywed couple rushed to Chennai to file nomination. Photograph:( WION )

As a candidate of the Bharatiya Janata Party and a full-time worker of the party since 2014, contesting the polls on the party ticket was a dream come true.

In what looked like a scene out of a movie, the newlywed bride and groom arrived at the Alandur Zonal office in Chennai, straight from their wedding venue and the groom filed his nomination to contest the polls.

It was not something that was intended or staged. Two very important events in 33-year old Vinoth Kumar's life happened to fall on Friday, February 4th 2022 - it was the day on which his wedding with S. Rajeswari was fixed and also the last day to file the nomination for the Urban Local Body election, where he was contesting for the first time.

The B.Sc graduate is contesting in Ward 162 in Chennai's Thillai Ganga Nagar.

As a candidate of the Bharatiya Janata Party and a full-time worker of the party since 2014, contesting the polls on the party ticket was a dream come true.

In 2016 too, he was granted a party ticket to contest the polls, but the elections weren't conducted that year. 2022 presented him with the next opportunity.

"It was only last week that I got the party ticket to contest for the Corporation Councillor post. Our wedding and reception were scheduled for the 3rd and 4th, respectively, I wanted to file the nomination well in advance, but things didn't go as planned. Due to certain delays, only by last night I was able to complete all the preparatory work to file the nomination, " he told WION.

A full-time #BJP worker since 2014, Feb4th also happens to be the day he joined the party..

He says there was a delay in paperwork, hence had to file nomination on last day, which also happened to be the fixed date for his wedding

After tying the knot in Tiruvallur, a district adjoining Chennai, the newlywed couple rushed to Chennai (a drive of over two hours), even skipping some of the mandatory photo sessions and the wedding festivities.

When asked about his wife's and family's thoughts about his rushing right after the wedding to file a nomination, he replied that they were all fully supportive of his decision and wanted him to succeed in his mission.

"I feel really rewarded today for my work and am grateful to the leadership. It was on February 4, 2014, that I joined the party. Today I myself have filed my nomination for contesting on the party's ticket. Eight years later, " he says with enthusiasm.