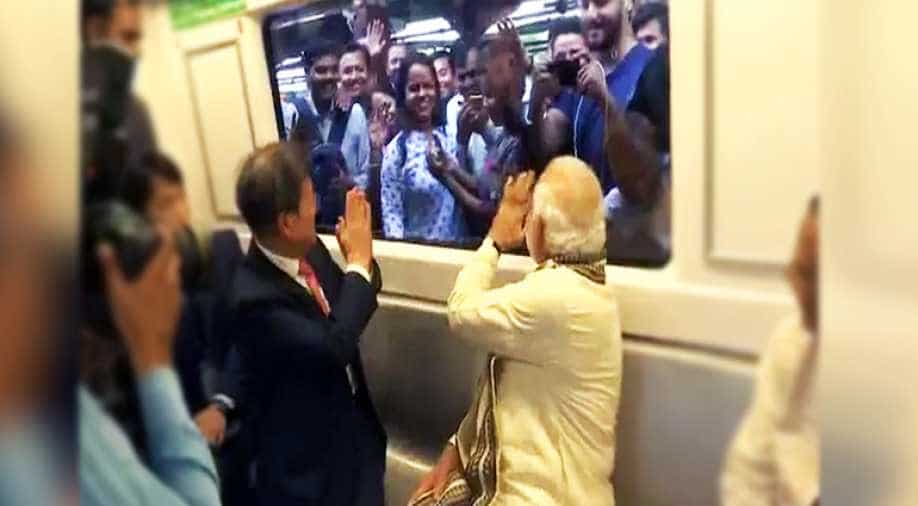 PM Modi addresses a rally in Karnataka's Tumakuru on May 5. Photograph:( ANI )

Launching an attack on the Congress in Tumakuru, PM Modi said the people of Karnataka were tired of the Congress which had 'cheated' the poor

Launching an attack on the Congress in Tumakuru, PM Modi said the people of Karnataka were tired of the Congress which had "cheated" the poor.

"From Indira Gandhi's time, Congress has only fooled poor people of society to win elections. They're a party of lies, they lie time and again for votes. They do not care about farmers nor are they concerned about poor. People are now tired of Congress," said the prime minister.

The prime minister also alleged a "tacit alliance" between the Congress and the JD(S) in the state.

"People of Karnataka need to know the tacit alliance between Congress and the JD(S). They pretend to fight but in Bengaluru, the JD(S) supported a Congress mayor," PM Modi said.

The prime minister said the enthusiasm of the people was evident in Tumakuru which was a land of great men.

"Feel blessed to be in Tumakuru...People of Tumakuru want change...This land of Tumakuru is home to several greats. After becoming PM I had come here to Tumakuru and sought the blessings of Sivakumar Swami Ji at the Siddaganga Mutt," PM Modi said.

"For years, Congress spoke of poverty over and over again but is mum about it ever since the son of a poor mother became prime minister," he said.

The prime minister said the election was about women's security, farmers' development and would decide the future of Karnataka.

"Vote for the BJP and Karnataka will flourish," he said.

"Congress ignored farmers for 70 years," he said, adding, "Farmers' plight today is because of Congress' policies, we are trying to wash away their sins."

The prime minister blamed the Congress for depriving the people of Tumakuru of the water from the Hemavati river.

"Why have the people of Tumakuru not got water from Hemavati river as yet? Our Government has worked on irrigation projects on which no work was done for 30 years. Congress is only interested in filling their safes with black money," PM Modi said.

Karnataka goes to polls on May 12. Counting of votes will take place on May 15.