Third century Indian artefact to be repatriated from Belgium 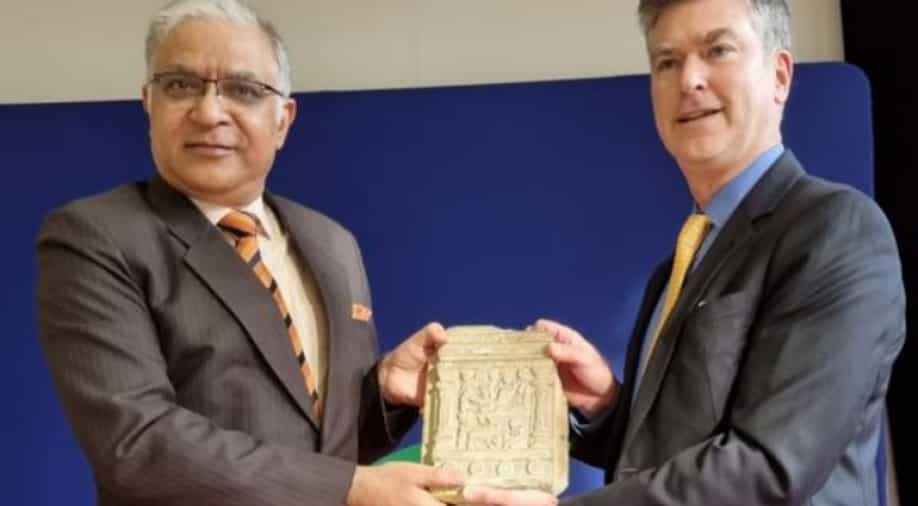 The sculpture is part of the ruined stupas in Andhra Pradesh’s Nagarjunakonda, Photograph:( WION )

The sculpture, which was part of the ruined stupas in Andhra Pradesh’s Nagarjunakonda, was handed over to the Indian envoy in Brussels, Santosh Jha, earlier this month.

After two years of painstaking efforts by the Art Recovery International & the India Pride Project, a 3rd century artefact that was stolen from India has been handed over to the Indian mission in Brussels, Belgium.

The sculpture, which was part of the ruined stupas in Andhra Pradesh’s Nagarjunakonda, was handed over to the Indian envoy in Brussels, Santosh Jha, earlier this month.

The Indian mission in Belgium in a tweet said, "We are grateful for their efforts of Art Recovery International (ARI) and India Pride Project (IPP) & working with ASI to arrange its return to India."

According to the ARI release, the purchaser had relied on a certificate of clearance from a UK based organisation that "regularly mints such documentation for the art trade as a substitute for proper due diligence without conducting provenance research on well documented and published antiquities."

The artefact was housed in an Indian museum until it was stolen in or around 1995.

It depicts the life of Buddha and shows a court scene from the stûpa 3 in Nagarjunakonda. It also shows a royal couple sitting on a throne attended by servants standing behind while a female servant and a child play with a ram in the foreground.

The development comes as Australia on Monday repatriated 29 antiquities to India. The antiquities range in six broad categories as per themes – Shiva and his disciples, Worshipping Shakti, Lord Vishnu and his forms, Jain tradition, Portraits and decorative objects.

These antiquities come from different time periods from 9th to 10th century CE.