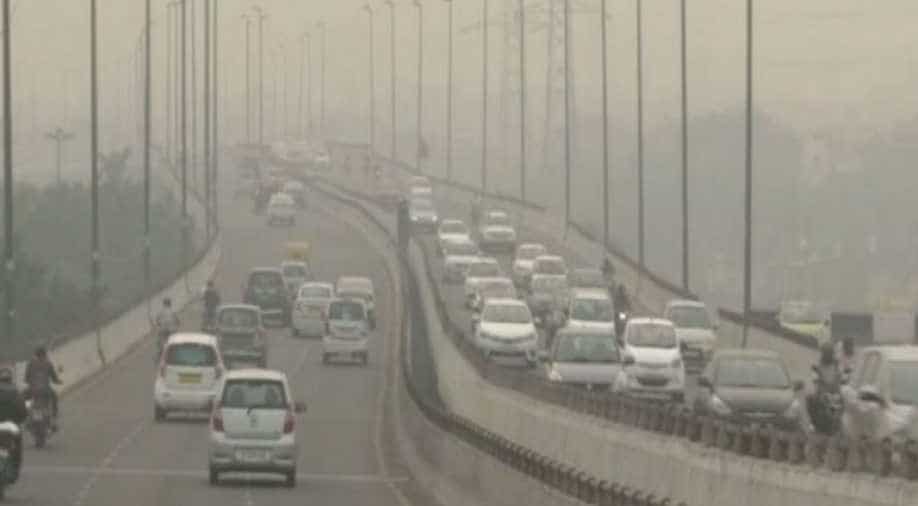 Notably, because of the thick blanket of smog in the morning, scores commuters faced difficulty reaching their office on time as the visibility was affected causing slow movement of traffic at the major junctions.

The air quality in the national capital and its adjoining regions continued to remain in the 'hazardous category' with the pollution level hovering near 400.

Notably, because of the thick blanket of smog in the morning, scores commuters faced difficulty reaching their office on time as the visibility was affected causing slow movement of traffic at the major junctions.

Due to the prevailing weather condition, the Arvind Kejriwal government in Delhi has announced to shut the schools till November 5 and has also banned all construction activities.

The government has declared a "public health emergency".According to the air quality index (AQI) in the Lodhi Road area, major pollutants PM 2.5 and PM 10 were recorded at 500 on Saturday.

In Uttar Pradesh's Noida, Moradabad, Hapur and Ghaziabad also, the air pollution was so severe that the locals were seen wearing masks while doing exercise today. AQI in Indirapuram was at 449 which falls in the 'hazardous category'.

"Despite the Supreme Court's ban, people have burst crackers. This has deteriorated the quality of air. The smog present in the atmosphere is causing respiratory illness. The Centre has issued some guidelines to prevent ourselves from air pollution. We are trying to follow it," said Mohini Malik, a school teacher.

In some cities of Punjab and Haryana such as Ludhiana, Ambala, and Kaithal, the air quality deteriorated so much that people were forced to remain outdoors in the morning.

"There is too much smoke outside. I am very feeling unwell. Too much money is getting spent on my treatment. I feel suffocated, the moment I step out of my house. All the places which emit smoke should be shut down at the earliest," said Bhupinder Kaur, a local from Ludhiana.

"In Ludhiana, the stubble burning practiced by farmers has caused air pollution in the region. I request the state government to fulfill the demands of the farmers and buy their stubble so that they do not burn it," said Satyendra Singh, a local from Ludhiana.

According to SAFAR, the air quality is likely to recover by the evening today towards the upper end of 'Very Poor'.

"A fresh Western Disturbance is likely to advance to eastern regions northwest India by November 2," the IMD stated in its All India Weather Warning Bulletin.

The organization has also mentioned about the menace of stubble burning causing air pollution and informed, "The effective stubble fire counts of Northwest India (Haryana and Punjab) touched a new peak value of this year (3178) yesterday. In the wake of favourable boundary layer meteorology prevailing between Delhi and Stubble burning region supported by calm surface wind condition of Delhi, accumulation of pollutants sharply increased and stubble share in Delhi's PM 2.5 touched season`s high of 44 percent on October 31 as against the expected 25 percent."

"The share is predicted to drop down to 18 percent by November 2 owing to the increase in ventilation index dispersing it. By November 3 significant improvement to the very poor is expected," the weather forecast agency stated.