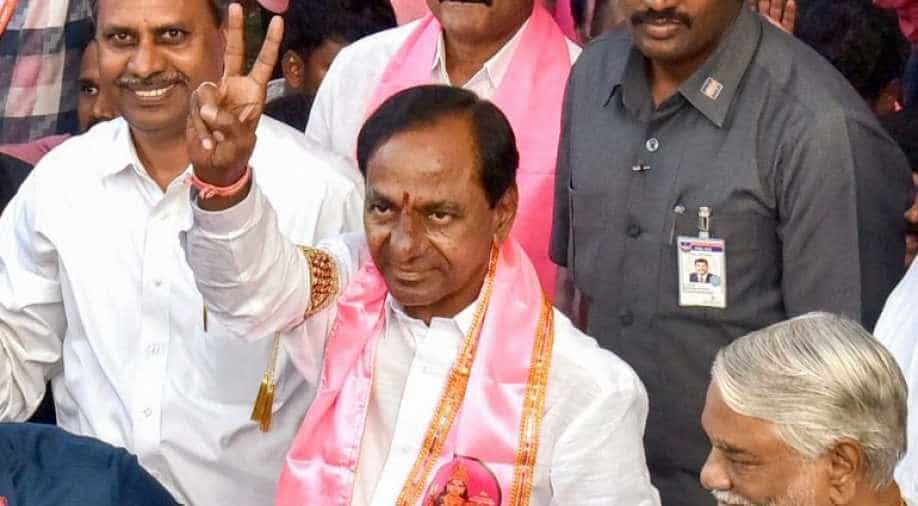 With the latest development, the grand old party of India, which had 18 MLAs in the Telangana Legislative Assembly, is now left with only 6.

It's a double whammy for Indian National Congress ( INC ) in Telangana.

After the rout in the 2018 Assembly Elections, the recently concluded general elections gave a glimmer of hope to the Congress party in Telangana where it managed to win three parliamentary seats. But that hope has been dashed with 12 of its MLAs pledging loyalty to Telangana Rashtra Samithi (TRS).

The 12 Congress MLAs, some of whom perceived to be close to party high command and Congress president Rahul Gandhi, met Telangana Legislative Assembly Speaker Pocharam Srinivas Reddy and gave a representation stating they are joining TRS ''inspired'' by the leadership of Chief Minister K.Chandrashekar Rao.

With the latest development, the grand old party of India, which had 18 MLAs in the Telangana Legislative Assembly, is now left with only 6.

Meanwhile, in a swift development, a bulletin released by the Telangana Legislative Assembly says, ``the speaker has taken note of 12 members of the Congress Legislature Party who constitute two-thirds of its total members in the Telangana Legislative Assembly are deemed to have been merged with the TRS Legislature party as per Paragraph four of the Tenth Schedule of the Constitution of India. Accordingly, seats are allotted to them alongwith members of TRS party in the House.''

The total strength of the Telangana Assembly is 119 but it reduced to 118 as Telangana Congress President and MLA Capt Uttam Kumar Reddy recently got elected to Lok Sabha from Nalgonda constituency.

Following is the break-up of parties position in Telangana Legislative Assembly.

This is for the second time such defections are taking place. Earlier, after the 2014 Assembly elections, TRS got a decent majority. However, many of the MLAs, mainly from Congress and TDP, defected to TRS.

As soon as 12 of their MLAs pledged support to TRS today, state Congress president Capt Uttam Kumar Reddy along with remaining MLAs and other senior party leaders staged dharna in front of Assembly. ``This is undemocratic and shows how TRS party is indulging in horse trading,'' said Captain Uttam Kumar Reddy.

The party is getting ready for a legal battle, he added.

Meanwhile, rebel Congress legislator from Warangal, Gandra Venkata Ramana Reddy, said the 12 MLAs decided to work with the chief minister for the development of the state.

Gandra confirmed that they gave a representation to the Speaker requesting him to merge them with the TRS.

" All of us (12 MLAs) held a special meeting of the Congress Legislature Party. The 12 members supported the leadership of Chief Minister KCR and wanted to work with him. We gave a representation to the Speaker and requested him to merge us with the TRS," Reddy said.

As 12 MLAs account for two-thirds of the Congress Legislature Party, which has an effective strength of 18, they will not attract provisions of the anti-defection law, official sources said.

'From LoC To LAC', fitting reply to those who challenge India: PM Modi's I-Day message to China