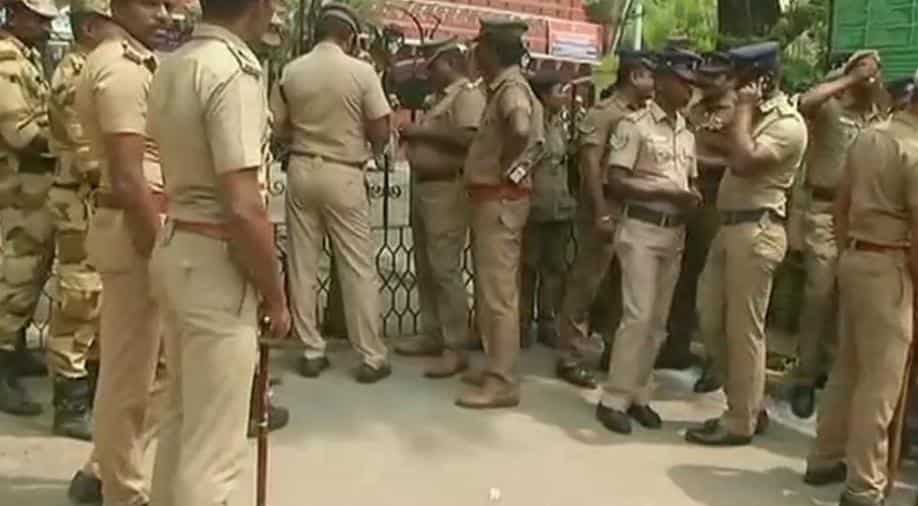 Visuals from outside the Chintadripet police station where Nakkeeran Gopal, Chief Editor of Tamil magazine Nakkeeran was detained. Photograph:( ANI )

Chief Editor of a Tamil bi-weekly magazine 'Nakkeeran,' Gopal was detained around 8.15 am from the Chennai airport.

Veteran Tamil journalist and publisher Nakkeeran Gopal was on Tuesday detained by Chennai police at the airport over a complaint filed by Governor Banwarilal Purohit's office over his publication's reportage on the Nirmala Devi case.

Chief Editor of a Tamil bi-weekly magazine 'Nakkeeran,' Gopal was detained around 8.15 am from the Chennai airport.

He was reportedly travelling to Pune to attend an event. Marumalarchi Dravida Munnetra Kazhagam (MDMK) chief Vaiko, who reached outside the Chintadripet police station where Gopal has been detained, said, "I sought permission to meet him but police are not allowing me. This arrest shows the threatening attitude of the authorities towards independent journalists. Is there Governor's rule in the state? I blame the state government."

The arrest of Nakkeeran Gopal (Chief Editor of Tamil magazine Nakkeeran) is not correct. I ask why has BJP leader H Raja who had given provocative speeches in the past not been arrested yet? Why is SVE Sekhar still free?: DMK President MK Stalin in Chennai pic.twitter.com/cWDwXAfjcm

Reportedly, the magazine run by Gopal featured pictures of Purohit and Nirmala Devi, an accused in the Madurai Kamaraj University sex scandal.

Devi, a college professor, was arrested earlier this year for allegedly asking her students to extend sexual favours to university officials in exchange for financial and academic rewards.

The arrest was made on the basis of an audio clip of Devi's conversation with her students, where she also mentioned that she was close to Purohit.

#UPDATE: Nakkeeran Gopal, Chief Editor of Tamil magazine Nakkeeran, has been arrested after a complaint filed by Raj Bhavan, over publication's reportage on Nirmala Devi case. Investigation is going on at Chintadripet police station. #TamilNadu https://t.co/tfuSJeX1ON

However, Purohit clarified on April 17 that he had no involvement in the case. He said, "I have not even seen her (Nirmala Devi) face till date, she hasn't met me."