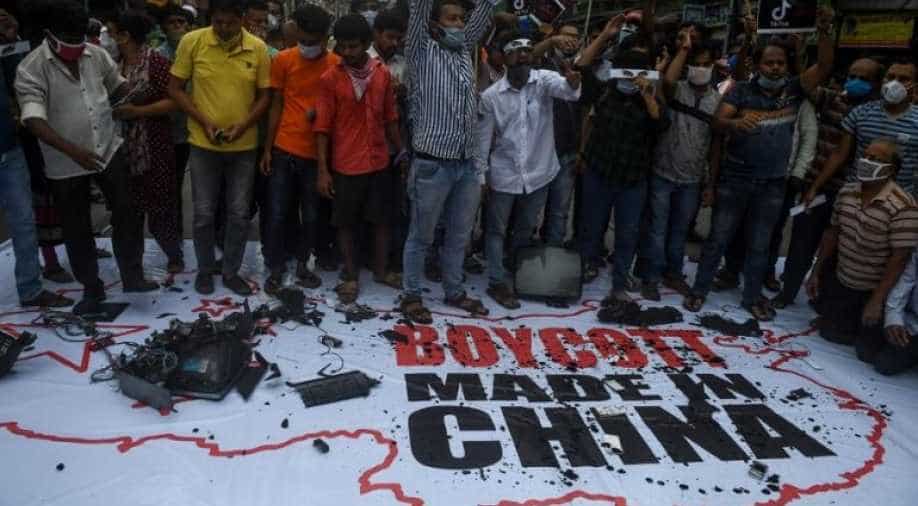 Congress party supporters shout slogans as they gather around a flag displaying the country and flag of China along with an inscription reading 'Boycott Made in China' Photograph:( AFP )

For starters, the government is attempting to limit cheap imports from China, in a bid to boost domestic manufacturing of those goods

After the violent clash between India and China at the Line of Actual Control, “Boycott China” became India’s mass movement against Chinese goods.

The government has fallen in line with the citizen’s sentiments by slowly attempting to corner out Chinese goods. For starters, the government is attempting to limit cheap imports from China, in a bid to boost domestic manufacturing of those goods.

To attain this goal, the government has sought domestic prices of similar goods that are made in India and details on domestic manufacturing capacity.

As per reports, the decision to review the situation was taken at the Prime Minister's office. A high-level meeting took place to discuss ways to promote a self-reliant India.

In the works for long

Even before the conflict had begun, India was attempting to limit such imports from China. The finance minister, Nirmala Sitharaman in her budget had suggested raising duties on as many as 300 Chinese products.

So far, anti-dumping duty has been levied on 90 Chinese products, but this list could swell enormously. In December 2019, India’s commerce minister Piyush Goyal indicated the number could go up to 5,000 products.

Additionally, the Indian government is reviewing its trade pacts with other countries. To override India’s plans, China is routing its goods to India via common trade partners.

The only trade agreement that involves both China and India is the Asia Pacific Trade Agreement, which is also under scrutiny right now.

Maharastra government fires back at China

State governments are not far behind. The Maharashtra state government has hit back at China, and has stalled three Chinese projects worth 5,000 crore Rupees.

Under the Magnetic Maharashtra initiative to get foreign investment into the state, the government had signed over 12 agreements.

While the agreements with Chinese companies have been put on hold, the other nine agreements are being processed without a hassle.