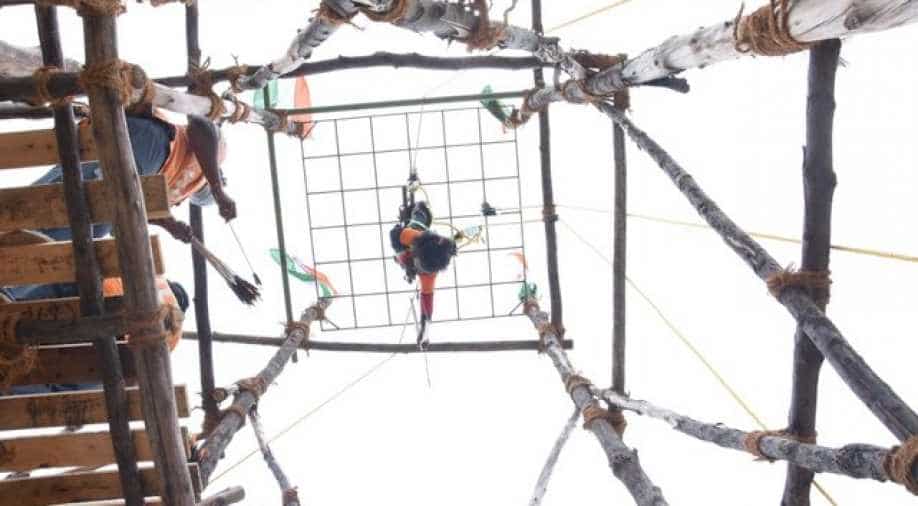 Sanjana undertook this feat amid safety and medical precautions after undergoing intense training for over a year.  Photograph:( WION )

Since 2018, Sanjana has had the rare distinction of being an archer who trains on three categories of bows- Indian bow, Re-curve and Compound bow. It is said that even professional archers, who compete at the international level don’t train on all three.

Not a stranger to records in archery, 5-year old Sanjana has successfully completed her most daring, fearsome feat yet! Suspended at a height of 20feet, head-over-heels from a wooden structure, the little girl managed to shoot 111 arrows, onto a target that’s 8 meters away.

All this, in under 13 minutes and 15 seconds. That’s a whopping 8 arrows per minute!

Sanjana undertook this feat amid safety and medical precautions after undergoing intense training for over a year. This is her third major archery feat in three consecutive years.

In 2018, she had shot 1,111 arrows continuously in under 3 hrs 30 minutes for a record. Last year she shot 300 arrows on target while being blindfolded.

Her training involved performing the Sirasasana (Head-stand) yoga posture to get used to the rapid flow of blood towards the head. Eventually, she was also coached and mentally trained to be able to perform this feat while being suspended 20-feet.

“Over one year, we gradually increased the intensity of training and the duration. First it was head-stand, then she was shooting arrows while upside-down and finally she was trying the same while being suspended” Sanjana’s mentor and mind-coach Shihan Hussaini told WION.

Since 2018, Sanjana has had the rare distinction of being an archer who trains on three categories of bows- Indian bow, Re-curve and Compound bow. It is said that even professional archers, who compete at the international level don’t train on all three.

Making her debut at the Tamil Nadu and National Archery meets, Sanjana had made waves. Participating in the under-9 age category she had struck gold, shooting in all three bows. At the national meet, she won a special recognition by winning the ‘Youngest Achiever Award’.

Her father, Premnath, who has a modest job, is elated at the little one’s achievements and adds that she was interested in the bow and arrow from her infancy. “She was gifted a bow and arrow for her birthday and was really obsessed with it. She started basic training when she was 2 years and 9 months old, most others begin only after turning five” he told WION.

When asked about the detractors voices and the risks involved, Hussaini said that the there were a few who pointed out the kid’s age and the health concerns, but he adds that safety was paramount and that they had done all they could for extra-safety.

“We had adequate practice, there was a doctor on-site monitoring her parameters, and also we had ensured that the wooden structure could handle much more than her body weight. We had even padded the regions where the ropes would hold her, to ensure that she’s comfortable. She didn’t wear a helmet, but that’s because it would obstruct her view” he says.

Her father says that she was completely normal and started playing and running around in joy after the feat was completed. So what’s next for the little champ? She’s training for the upcoming national archery event.

But whether the event would take place is purely dependent on how the COVID-19 scenario evolves. However, the very reason behind this feat was that “COVID-19 has turned the world upside-down, but the indomitable human spirit can achieve, even in the face of adversity” Hussaini says.