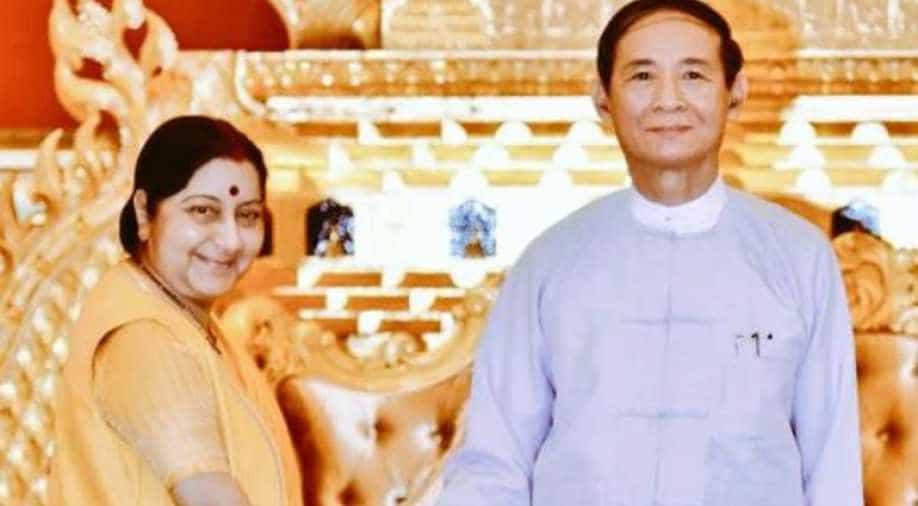 External Affairs Minister Sushma Swaraj is on a two-day visit to Myanmar where she will hold discussions on key bilateral and regional issues.

on reaching Myanmar's capital Nay Pyi Taw Thursday, Sushma was received by Ambassador of India and Permanent Secretary of Ministry of Foreign Affairs.

Later, she also held a meeting with the President of Myanmar, U Win Myint.

Swaraj may discuss the situation of the Rakhine state and the displacement of over thousands of Rohingya Muslims from there since August.

Myanmar has a strategic role to play in India's neighbourhood as it shares its border with many northeastern states including Mizoram, Manipur and Nagaland.

In December last year, India has announced an aid of $ 25 million for the Rakhine state.

On her arrival in Nay Pyi Taw, EAM @SushmaSwaraj was warmly received by Ambassador @VikramMisri and Permanent Secretary of Ministry of Foreign Affairs of Myanmar U Myint Thu. pic.twitter.com/QLiv72TT1u

Neighbourhood first! EAM @SushmaSwaraj emplanes for Nay Pyi Taw on a bilateral visit to Myanmar on 10-11 May. EAM will hold discussions with Myanmar leadership to further reinforce our bilateral ties. pic.twitter.com/BArvYrT2PD