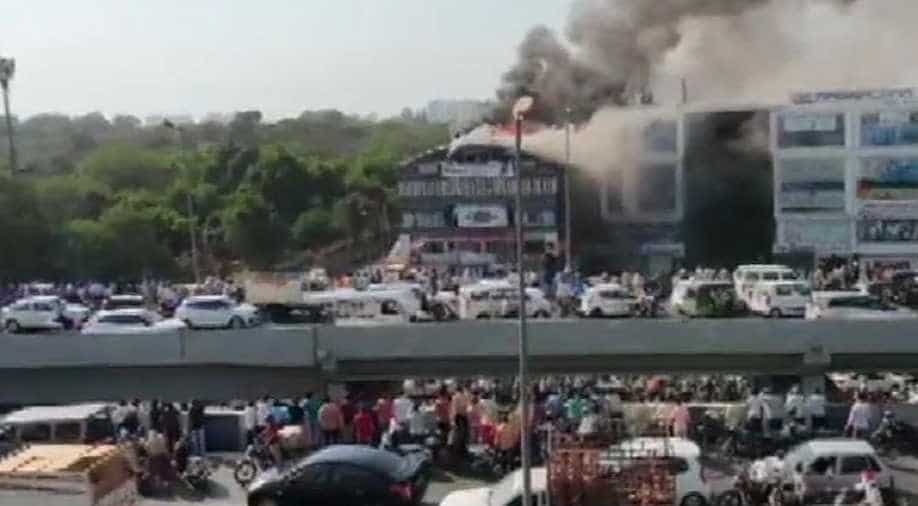 Visuals from Sarthana area of Surat where a fire broke out on the second floor of a building. Photograph:( ANI )

At least 20 people have died with over 20 injured in the major fire that broke out in Sarthana area of Surat, Gujarat on Friday evening.

Satish Sharma, Commissioner of Surat Police told media that an FIR against three people has been registered in connection to the massive fire that broke out in Sarthana area of Surat, Gujarat on Friday evening, killing around 20 people.

The FIR has been registered against the builders of the complex - Harshal Vekaria and Jignesh - and the owner of the coaching centre Bhargav Bhutani.

Sharma added that the police have arrested the man who used to conduct the tuition classes.

The case was registered under section 304 (culpable homicide not amounting to murder) and section 114 (abettor present when an offence is committed) of the Indian Penal Code in Sarthana police station against coaching centre owner Bhargav Bhutani and builders of the complex - Harshal Vekaria and Jignesh, Surat police said.

At least 20 people have died with over 20 injured.

Satish Sharma, Commissioner of Police Surat: Have arrested the man who used to conduct the tuition classes. #SuratFire #Gujarat pic.twitter.com/eAmGFlAhGt

The fire broke out on the second floor of a building in Takshashila Apartments, ripping through the interior design coaching centre.

Chief Minister Vijay Rupani ordered an investigation into the incident and declared a financial help of Rs 4 lakh each to the families of the victims. He also visited the hospital to meet the injured ones.

Prime Minister Narendra Modi in a tweet sent out condolences for the affected families while praying for the recovery of the injured.

“Extremely anguished by the fire tragedy in Surat. My thoughts are with bereaved families. May the injured recover quickly. Have asked the Gujarat Government and local authorities to provide all possible assistance to those affected” Modi tweeted.

Home Minister Rajnath Singh tweeted "Deeply saddened by the loss of precious lives due to fire in Surat. My thoughts are with the families of the deceased. I pray for the speedy recovery of the injured."