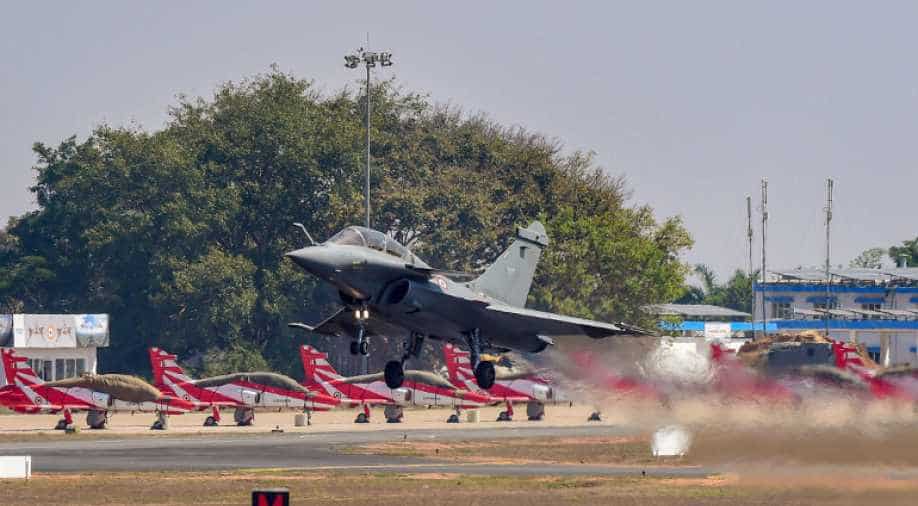 The Supreme Court will hear on February 26 the two petitions seeking review of its December 14 verdict that had dismissed pleas challenging the deal between India and France for procurement of 36 Rafale fighter jets.

The hearing of the pleas will be conducted in chambers and not in open court.

The trio said the top court had relied upon "patently incorrect" claims made by the government in an unsigned note given in a sealed cover in the court.

Sinha, Shourie and Bhushan have claimed that the judgement was based on "errors apparent on the face of the record" and non-consideration of subsequent information which has come to light would cause a grave miscarriage of justice.

Besides seeking review of the judgement, they have also sought hearing of the plea in an open court.

On December 14, 2018, the apex court had dismissed various pleas challenging the deal between India and France for procurement of 36 Rafale jets saying there was no occasion to "really doubt the decision making process" warranting setting aside of the contract.

It had rejected the pleas seeking lodging of an FIR and the court-monitored probe alleging irregularities in the Rs 58,000 crore deal, in which both the countries have entered into an inter-governmental agreement (IGA).

A bench headed by Chief Justice Ranjan Gogoi had dealt with "three broad areas of concern" raised in the petitions -- the decision making process, pricing and the choice of Indian offset partners (IOP) -- and said there was no reason for intervention by the court on the "sensitive issue" of purchase of 36 jets.

It had said the Indian Air Force (IAF) needs advanced fighter jets as the country cannot afford to be "unprepared" or "underprepared" in a situation where adversaries have acquired fourth and fifth-generation fighter aircraft, "of which, we have none".

The apex court had said Thursday that it would consider hearing pleas seeking review of its December 14 verdict. It had considered the submission of Bhushan that his review plea and a separate application, seeking perjury prosecution of some government officials for "misleading" the court be listed urgently.

"We believe there are four petitions in the matter. One by Union of India... Some petitions (having defects) are lying with the registry," the bench said.
"The combination (of the judges) of bench will have to be changed. It is very difficult. We will do something for it," the bench had said.

The December verdict was delivered by the bench comprising the CJI and Justices S K Kaul and K M Joseph. The two Justices are currently part of different bench combinations.

Bhushan had said the review petition filed by Sanjay Singh was defective and the defect has to be cured and so far as other pleas were concerned, they can be listed for the hearing.

A day after the December verdict, the Centre had moved the apex court seeking correction in the judgement where a reference has been made about the Comptroller and Auditor General (CAG) report and Parliament's Public Accounts Committee (PAC), saying "misinterpretation" of its note has "resulted in a controversy in the public domain".

Sinha, Shourie and Bhushan has also filed a separate plea seeking initiation of perjury proceedings against central government officials for allegedly giving "false or misleading" information in a sealed cover in the case.