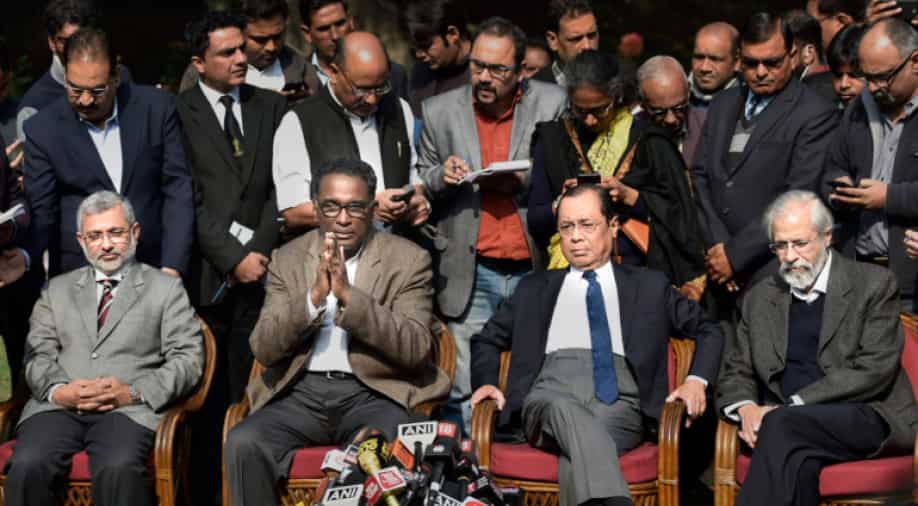 The Bar Council of India (BCI) today said the crisis, which had erupted after four top Supreme Court judges came out openly against allocation of cases by Chief Justice of India Dipak Misra, has been resolved internally and the "story is over now".

BCI Chairman Manan Kumar Mishra, who led a seven-member delegation and held hectic parleys with 15 judges including the CJI yesterday, said the controversial issues flagged by the four revolting judges were "internal issues of the family" which have been resolved internally.

"Kahani khatam ho gaya (the story is over now)", he said even as he cautioned political parties and their leaders not to take undue mileage from the January 12 press conference by the four judges to raise problems, including the assigning of cases, saying the matter should not be politicised.

"We met around 15 judges yesterday and all of them said that BCI has done a very good job and this mediation was required. They have now resolved the issue.

"BCI has been successful in its effort. No outside interference was required in the matter and even we will not impose any condition on them and they themselves would solve their differences over a cup of tea," he told reporters here.

At a press conference on January 12, the four judges -- Justices J Chelameswar, Ranjan Gogoi, Madan B Lokur and Kurian Joseph -- had flagged some issues, including assigning of cases in the apex court and judicial appointments, and said there were certain problems afflicting the country's highest court.

He also referred to Attorney General's K K Venugopal's statement in which he is reported to have said that the issue has been resolved.

"They have resolved the issue and you can see that the courts are functioning smoothly and they are discharging their duties. There is nothing left", Mishra said.

Responding to a question whether an investigation should be ordered on allegations of the senior most judges, Mishra said the Bar body was not concerned with this and there is no question of any probe.

He also said the death of special CBI judge B H Loya, who was trying the Sohrabudin Sheikh fake encounter case, should not be raked up as his family members have made their stand clear and want no more harassment.

"There is no question of any probe (into points raised by four judges in the presser). If somebody tries to bring Justice Loya's issue then you can see their family members have already said there is no need for any investigation and they were being unnecessary harassed.

"We are only concerned with smooth functioning of this institution. We have no right to say and decide whether there should be a Code of Conduct," he said.

On the issue of bringing more clarity in the functioning of the top court, the BCI Chairman said the system was working properly and "there was transparency".

"They have evolved a formula and while rejecting a name for elevation they are assigning the reason and it is there on the Supreme Court website. What more transparency do you want," he said.

He said all the four top judges have resolved the differences and were attending the court today.

To a question whether any action should be taken against them for criticising the Chief Justice of India, he said there is no need of any action and they "are all honest and men of integrity."

Yesterday, Chief Justice of India Dipak Misra had met a seven-member delegation of the BCI and Supreme Court Bar Association President Vikas Singh and assured them that the crisis would be sorted out soon and congeniality would prevail.