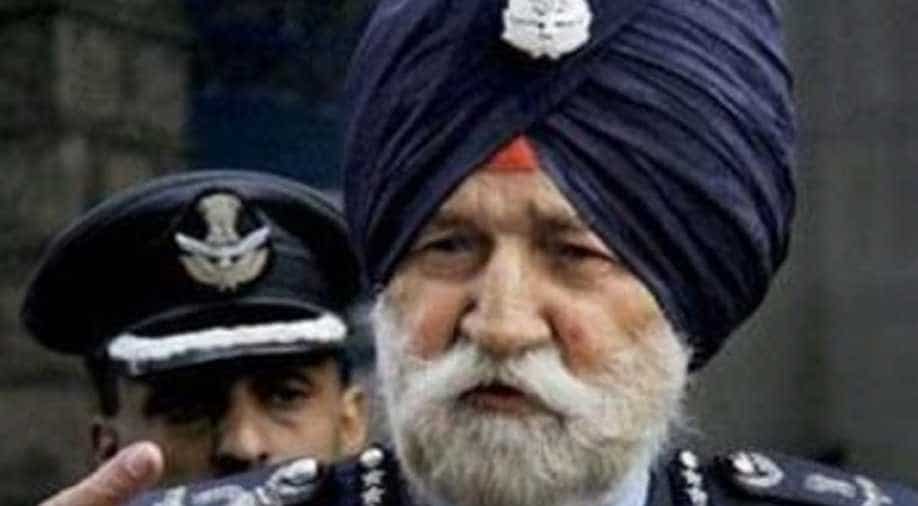 As the last rites of Marshal of the Indian Air Force Arjan Singh were being conducted inside the cremation ground at Brar Square in Delhi. Photograph:( Zee News Network )

As the last rites of Marshal of the Indian Air Force Arjan Singh were being conducted inside the cremation ground at Brar Square in Delhi Cantonment Monday morning, three Sukhoi-30 MKI fighter aircraft conducted a flypast to honour the departed soldier by flying in the “Missing Man” formation—a formation in which one slot in a bunch of four planes is left deliberately vacant. The “Missing Man” here denoted the departed soul. It was also symbolic of how India and its Air Force will miss this warrior of the skies forever.

Minutes earlier, three MI-17 V5 helicopters had flown past over the cremation ground tropping IAF colours and five UK-made Pounder Guns of 1941 vintage fired in cyclical fashion with a 2.5 second gap between each round to give a 17-gun salute to the Marshal of the Indian Air Force who died on the evening of September 16 after suffering a cardiac arrest. The 17-gun salute was fired once the last rites had been completed and before the pyre was lit.

Once the formal funeral ceremony got over, it was time for family members and close relatives to sit and reminisce about the man, the soldier, the leader, the officer and of course, Indian Air Force's first and only five-star ranked officer.

“I think if people can follow some of his principles, it (the country) would be a much better place,” said Arvind Singh, the son of the deceased Marshal of the IAF, who flew in from the United States to be in time for the funeral. Many relatives who are settled abroad could not make it in time.

Arvind Singh also fondly recounted how Marshal Singh once walked up to him and his mother and asked, “Are you okay if we give away all this?” when he was planning to sell his personal farm to set up a Trust devoted to the welfare of retired Air Force personnel. “I was ecstatic,” Arvind Singh said, adding that one of the main conditions his father had imposed was that no family member would have any interest in the Trust. The Rs 2 crore raised by selling that farmhouse was used to set up the Trust.

“The Trust has grown, has done very well and a lot of people have followed his footsteps. Many non-commissioned officers are now contributing to that trust which is a very good precedent in India where we have a lot of inequality of wealth,” the Marshal's son said.

Group Captain A.K Dash, the doctor who had been attending to Marshal Arjan Singh for the past many years, told WION that on the day he had to be rushed to the hospital, Singh “did not want many doctors to intervene” and that “he was feeling restless”. “He never wanted any treatment to be given at any point of time. But we used to convince him,” Dash said.

In addition to serving officers, scores of retired Air Force personnel had turned up to pay their last respects to the deceased Marshal. Two such aged seniors,who could barely walk, slowly made their way to the funeral pyre, stood there for a few moments and then saluted the man who had now gone “missing” from the physical world, just like that “missing” Su-30 in the flypast a few minutes back.