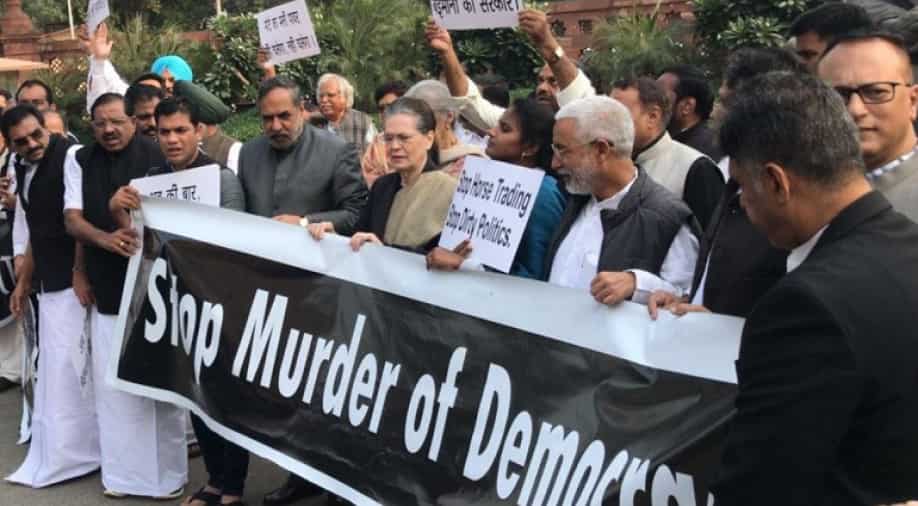 Sonia Gandhi and other Congress leaders carried a banner which read ''stop murder of democracy''.

Even as the hearing in the Supreme Court is underway on a petition jointly filed by the NCP-Congress and Shiv Sena against the formation of BJP-led government in Maharashtra, Congress Interim President Sonia Gandhi led a party's protest in Parliament premises over Maharashtra government formation issue.

Sonia Gandhi and other Congress leaders carried a banner which read ''stop murder of democracy''.

The Congress MPs gathered in front of the Gandhi statue and raised slogans of "Modi government shame shame" and "save our democracy". Party president Sonia Gandhi also joined the protest.

Inside the House, two Congress MPs, including TN Prathapan and Hibi Eden, showed a big banner, and other MPs also put up placards and raised slogans against the Modi government saying "Democracy has been killed in Maharashtra".

Meanwhile, Congress leader Rahul Gandhi in the said Lok Sabha ''I wanted to ask a question in the House but it doesn't make any sense to ask a question right now as democracy has been murdered in Maharashtra.''

At a time when deliberations among Congress, NCP and Shiv Sena on the formation of a non-BJP government in the state had seemingly reached the final stage, the BJP formed the government in a surprise development on Saturday morning when Devendra Fadnavis took oath for the second consecutive term as the state Chief Minister, with NCP's Ajit Pawar as his Deputy Chief Minister.