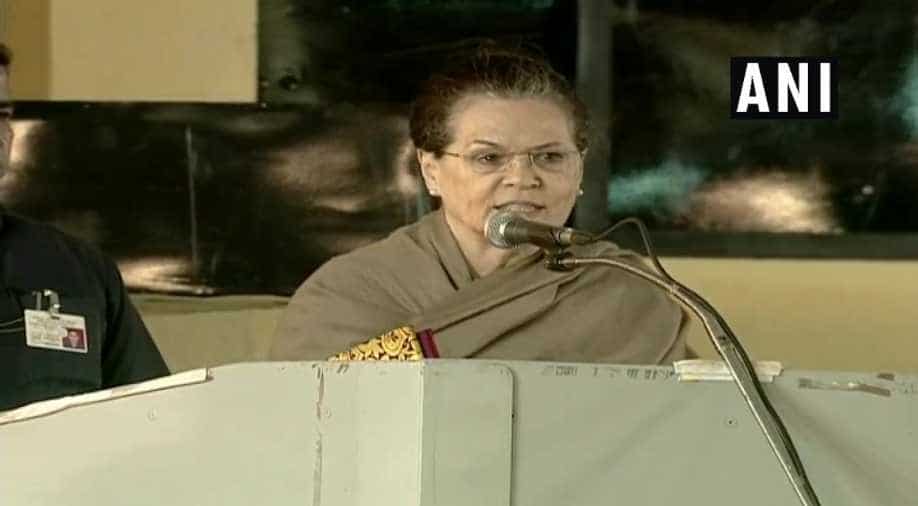 Gandhi, who unveiled a statue of late DMK patriarch M Karunanidhi at the Dravidian party's headquarters here, heaped praise on the late leader.

Congress Parliamentary Party chairperson Sonia Gandhi Sunday hit out at the BJP for being determined to destroy constitutional values, and sought "steadfast and strong ties" between her party and the DMK to trounce the saffron party in the next year's Lok Sabha elections.

Gandhi, who unveiled a statue of late DMK patriarch M Karunanidhi at the Dravidian party's headquarters here, heaped praise on the late leader.

Sonia Gandhi in Chennai: It's my desire that mutual support of our parties to each other remain strong as when Karunanidhi ji was guiding us,as we wage together a battle with political forces that are determined to destroy our constitutional values&the idea of India as we know it pic.twitter.com/js5Vi5gaIE

"Karunanidhi was a Democrat to the core and a believer in parliamentary institutions," she said, adding her party will always remember his support to former prime minister Indira Gandhi in 1971 and 1980 towards Indira's bank nationalisation and the abolition of privy purses initiatives.

''It is my earnest desire that the mutual support of our parties to each other must remain strong and steadfast as when Karunanidhi ji was guiding us...And as we wage together a battle with the political forces that are determined to destroy our constitutional values, our institutions and the idea of India as you know it,'' she said in an apparent reference to the BJP.

Gandhi said the message of unity among the Congress and the Dravida Munnetra Kazhagam (DMK) should go to the people.

"Let the message go to the people of Tamil Nadu and the country that we are united and determined to protect and preserve our country's constitution and its values that has built and sustained India over the last 70 years," she asserted.

Recalling her association with Karunanidhi, the Congress leader said the late patriarch was a great support and strength for the UPA from 2004 to 2014.

''I personally remember that we looked up to his knowledge and experience to guide our coalition government," she said.

Gandhi lauded Karunanidhi for his service to the people, his literary passion, love for Tamil language and his powerful oratory.

Speaking on the occasion Rahul Gandhi said the BJP government believes "only one idea should run India".

Training his guns on the Narendra Modi government, Gandhi accused it of targeting institutions of the country, besides the culture of India.