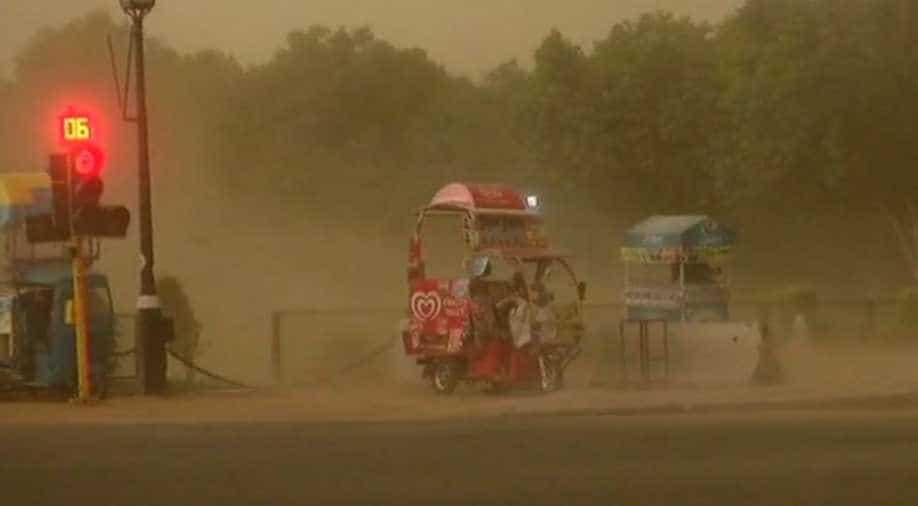 A dust storm accompanied by squall hit the national capital on Sunday after a scorching hot morning bringing down the mercury.

In a sudden change of weather, the sky turned cloudy around 4:30 pm and gusty winds swept the city.

The temperature was today recorded at 30.6 degrees Celsius. The humidity was recorded at 60 per cent at 8:30 am, a Meteorological (Met) department official said.

The Met office has forecast light rains will follow the dust storm.

Traffic came to a crawl at several areas in Delhi as the strong wind picked up dust and swirled them around, reducing visibility.

Airport authorities had to divert at least 10 domestic flights, an official said. Vistara's Srinagar-Delhi flight was diverted to Amritsar and its Lucknow-Delhi flight was sent to Lucknow due to the inclement weather.

Metro movement at the Noida-Dwaraka line was stalled for 30 minutes due to bad weather conditions. The movement has now resumed, according to ANI.

The dust storm interrupted a programme that Delhi Chief Minister Arvind Kejriwal was to attend in east Delhi's IP Extension. A Vistara flight coming to Delhi from Srinagar was diverted to Amritsar due to the dust storm, an ANI report said.

It had also forecast parts of Rajasthan might see dust storm.

Thunderstorm over these hill-states states and its subsequent effect on plains in north Indian is due to a new western disturbance, the IMD had said.