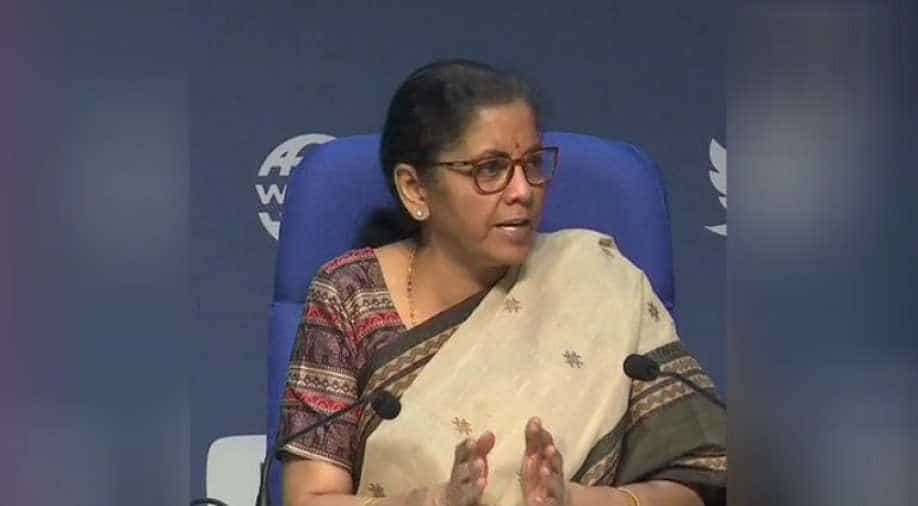 The finance minister said the government would introduce competition, transparency and private sector participation in coal sector through a revenue sharing mechanism instead of regime of fixed rupee/tonne.

Structural reforms were the focus of the fourth tranche of the Rs 20 lakh-crore economic stimulus package -- to help the country become self-reliant -- that Union finance minister Nirmala Sitharaman announced in a press briefing on Saturday. The package was first announced by Prime Minister Narendra Modi on May 11 in a televised address to the nation.

The finance minister said the government would introduce competition, transparency and private sector participation in coal sector through a revenue sharing mechanism instead of regime of fixed rupee/tonne.

"PM Modi had said that we should prepare for tough competition. When we speak of AatmaNirbhar Bharat, we are not looking inwards; it is not isolationist policy. It simply means we are making India rely on its strengths, and are ready to face global challenges," Sitharaman said, adding today’s announcements will focus on structural reforms in new sectors, where growth is possible and employment is generated.

"We are going to focus on eight sectors today -- coal, minerals, defence production, airspace management, MROs, power distribution companies, space sectors, atomic energy," she said, adding, "once we decongest sectors, we can boost the sector, for growth and jobs."

A viability gap funding was provided for the creation of social infrastructure like hospitals, while a PPP model was proposed for the country's space programme.

The government also decided to establish research atomic reactor in PPP mode for the production of medical isotopes to provide affordable treatment for cancer and other diseases.

Sitharaman said, "There is a need to reduce import of substitutable coal and increase self-reliance in coal production. Therefore, the government will introduce competition, transparency and private sector participation in coal sector through a revenue sharing mechanism instead of regime of fixed rupee/tonne. This means, now, any party can bid for a coal block and sell in the open market."

For this, entry norms will be liberalised.

The Centre will offer nearly 50 blocks immediately with no eligibility conditions, but only upfront payment with a ceiling.

"The sectoral reform for mining of minerals will boost growth, employment and bring state-of-the-art technology especially in exploration," Sitharaman said, adding, "the government will introduce a seamless composite exploration-cum-mining-production regime. As many as 500 mining blocks will be offered through an open and transparent auction process. The government will also introduce a joint auction of bauxite and coal mineral blocks to enhance aluminum industry's competitiveness. This will help the industry reduce electricity costs."

SELF RELIANCE IN DEFENCE PRODUCTION

India will ease limits on foreign direct investment in defence manufacturing, in a bid to bring more production into the country.

Under the plan, foreign investors would be able to own up to a 74% stake in defence manufacturing ventures, up from the current 49% limit. India would also expand the list of weapons that can not be imported,

"We will notify a list of weapons/platforms for ban on import with year wise timelines. There will be indigenisation of imported spares."

- Government to corporatise Ordnance Factory Board

- "India will become a global hub for Aircraft Maintenance, Repair and Overhaul (MRO). The tax regime for the MRO ecosystem has been rationalised. Aircraft component repairs and airframe maintenance to increase from Rs 800 crores to Rs 2000 crores in three years."

- "Airports Authority of India has awarded three airports out of six bid for operation and maintenance on Public-Private Partnership (PPP) basis. Additional investment by private players in 12 airports in first and second rounds expected around Rs 13,000 crore."

- "Restrictions on the utilisation of Indian Air Space will be eased so that civilian flying becomes more efficient. This will bring a total benefit of Rs 1,000 crore per year for the aviation sector."

- "Foreign Direct Investment limit in defence manufacturing under automatic route is being raised from 49 per cent to 74 per cent."

- Six more airports for auction under a PPE model. Annual revenue from this in the first round can amout to Rs 1,000 crore/year with an additional downpayment of Rs 2,300 crore for the Airports Authority of India. Additional investment by private players in 12 airports in the first and second rounds are expected to bring in around 13,000 crore. Another six airports will be put out for the third round of bidding

- Restrictions on utilisation of the Indian air space to be eased for increasing efficiency of passenger aircraft, to cut fuel usage and time

The government would boost private sector investments in social-infrastructure projects, like hospitals, by revamping the Viability Gap Funding Scheme. The total outlay for this has been pegged at Rs 8,100 crore.

"A tariff policy with reforms will be released, including consumer rights, promotion of industry and sustainability of sector."

- Privatisation of Discoms in Union Territories

"Indian private sector will be a co-traveller in the space sector journey. This will provide a level-playing field for private companies in satellites, launches and space-based services."

Taking to Twitter, the prime minister said important sectors such as coal, minerals, defence, aviation, space and atomic energy have been covered in the announcements made by Finance Minister Nirmala Sitharaman on Saturday.

"The measures and reforms announced will create many business opportunities and contribute to economic transformation," he said.

Important sectors such as coal, minerals, defence, aviation, space and atomic energy have been covered in the announcements by the FM today. The measures and reforms announced will create many business opportunities and contribute to economic transformation.

In her third conference, Sitharaman had announced 11 measures for the agriculture sector as part of the third tranche of the government’s relief package. She announced a Rs 10,000 crore scheme for the formalisation of micro food enterprises, and the creation of a Rs 1 lakh-crore agriculture infrastructure fund for farm-gate infrastructure.

Earlier announcements had focussed on the poorer segments of society, including migrant labour, small and marginal farmers and urban poor, seems skewed more towards the long-term.

The ‘One Nation One Ration card’ scheme under which migrants will be enabled to access Public Distribution System from any Fair Price Shop in the country by March 2021 was a part of the prime minister's technology-driven system reforms.