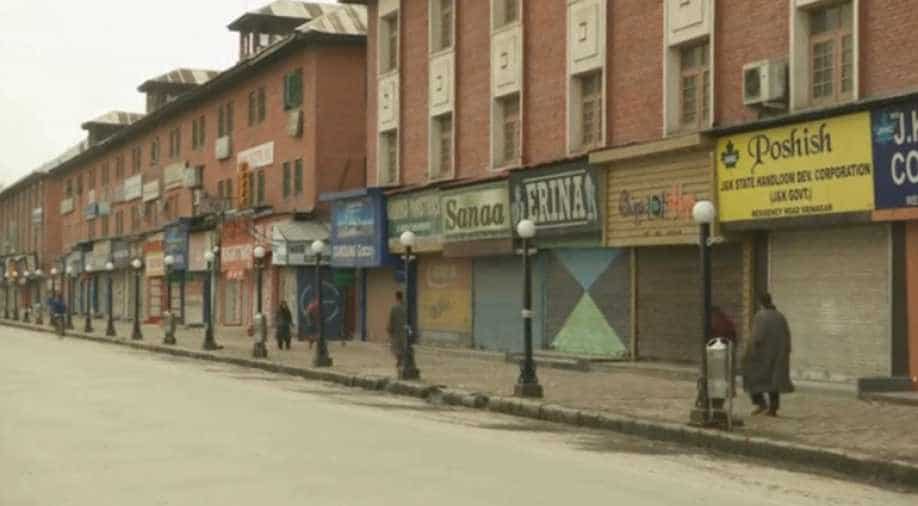 Restrictions and shutdown also mean several problems for the common people who face difficulties in buying daily essentials like milk and vegetables.

Monday is usually a busy day as offices and establishments open after the weekend and the increased traffic flow results in Monday morning blues. But in the Kashmir valley, it's a different story.

The Valley is shut today due to a strike called by separatists to protest the recent killings.

The main business centres in the Valley are closed and life has come to a grinding halt. People are mostly staying indoors in the volatile areas where spools of concertina wires are dominating the scene.

The tensions are in the air and hit your face as soon as you leave your residence. Though this is a usual site for the locals, it results in loss to the business and tourism sectors.

Restrictions and shutdown also mean several problems for the common people who face difficulties in buying daily essentials like milk and vegetables.

"Whenever there is a shutdown call given, we get confined to our rooms. Security forces don't let us out and later during clashes, tear gas and pepper gas makes our life miserable," said a local from the Old city of Srinagar over the phone.

Schools and educational institutions have also been closed by the authorities as a precationary measure to avoid students' particiation in the protests - a trend which has gained prominence in the Valley over the last the few years. Men in camouflage with guns and sticks are ready and alert in the downtown area of Srinagar. The area has witnessed frequent protests and stone pelting leading to injuries and death of many.

People in the villages face difficulty in commuting as most of the bus services- which are limited- remain off-road. Emergency services are too hit when the authorities impose a strict curfew to avoid civilian casualties in protest.

Small shops - which are away from the public light - remain open in uptown Srinagar where the effect of the shutdown is partial. Mobile internet has also been suspended in parts of rural areas to stop spread of fake information.

According to the International Council for Research on International Economic Relations, Kashmir's economy lost Rs 4000 crore between 2012 and 2017 due to internet shutdown.

The shutdowns and restrictions have now paralysed life for too long that even separatists are rethinking about this strategy.