Samsung Galaxy S9, Galaxy S9+ will be available in India in March 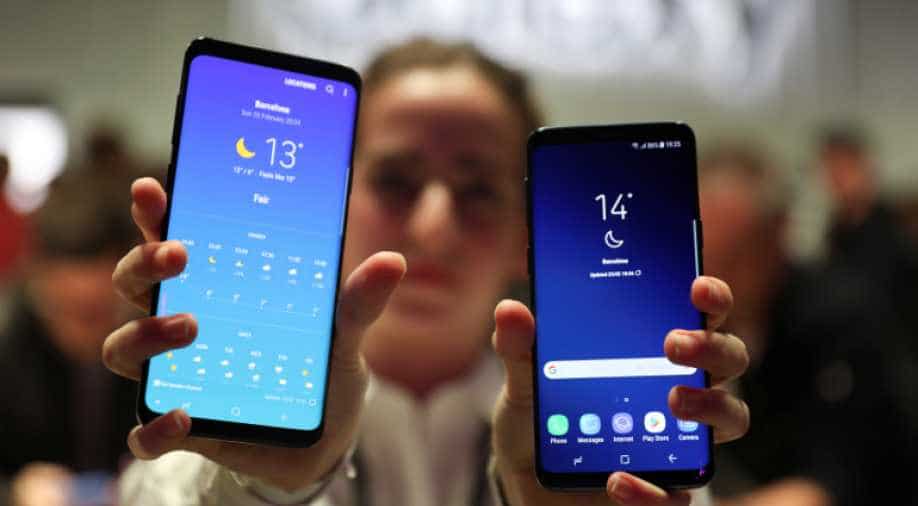 A hostess shows up Samsung's new S9 (R) and S9 Plus devices after a presentation ceremony at the Mobile World Congress in Barcelona. Photograph:( Reuters )

Samsung Electronics Co Ltd unveiled its flagship Galaxy S9 smartphone on Sunday with an emphasis on visual applications for social media, hoping to attract tech-savvy young consumers to whether a market slowdown.

The S9 and S9+ have the same bezel-less designs with the tall 18.5:9 aspect ratio screens.

While the design remains the same, the new phones are slightly different in terms of the dimensions, which means if you are upgrading, the same cases and covers may not work.

While some markets will get the Qualcomm Snapdragon 845 processor with 4GB or 6GB RAM, other markets such as India will get Samsung’s latest Exynos processors.

The Galaxy S9 and S9+ will be offered in Midnight Black, Titanium Gray, Coral Blue and a new hue, Lilac Purple.

Samsung Galaxy S9 and Galaxy S9+ are officially going on sale in international markets like the US, etc on March 16. The India launch should take place after this, though Samsung is also accepting pre-bookings on its online store for an amount of Rs 2000. Samsung will likely launch this phone in India by March given that pre-bookings are open.

The Galaxy S9 and S9+ cameras have a "SuperSpeed Dual Pixel" sensor with dedicated processing power and memory to take high-quality pictures.

Samsung`s "Dual Aperture" (F1.5 / F2.4) - the world`s first such feature in any smartphone -- automatically lets in more light when it`s dark and less light when it`s too bright, taking photos that are crisp and clear.

The Galaxy S9 and S9+ also offer automatic "Motion Detection", a feature that detects movement in the frame and automatically begins to record -- all users have to do is set up the shot.

After capturing the "Super Slow-mo" video, users can select background music from 35 different options or add a tune from their favourite playlist.