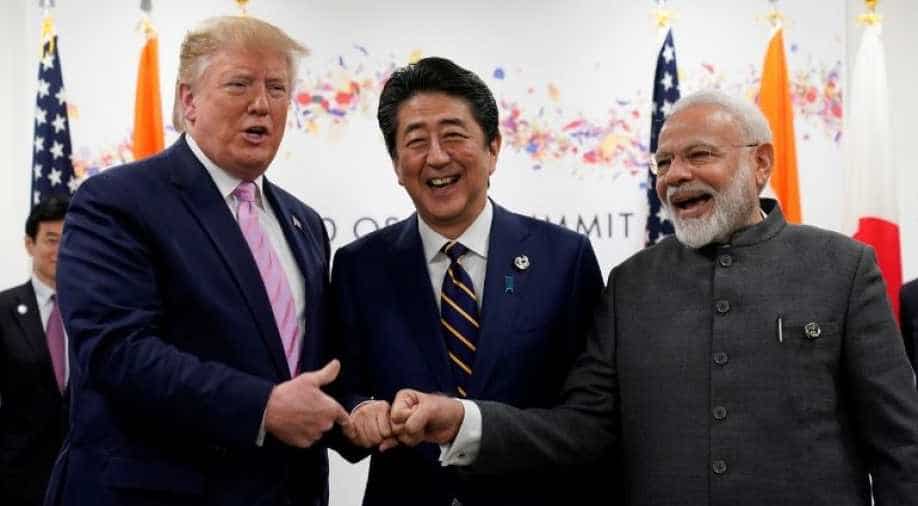 At the press briefing, Gokhale said Modi and Trump agreed that they would meet at an early date to try and sort out issues pertaining to trade between the two countries.

Prime Minister Narendra Modi and United States President Donald Trump held a "very productive and open discussion" on a range of issues including trade, tensions with Iran, and 5G technology, but did not touch upon the S-400 missile deal in their bilateral meeting, Ministry of External Affairs said on Friday.

"It was a very productive and open discussion. We will take things forward. There was very little discussion on defence issues. S-400 issue was not discussed. We highlighted the potential of cooperation in this area which was welcomed by President Trump," Foreign Secretary Vijay Gokhale said at a press conference here on the sidelines of the 14th G20 Summit.

This comes a few days after US Secretary of State Micheal Pompeo had said the two countries should be able to provide security for themselves. It also comes at a time when the US has put forth suggestions for India to look for alternatives to the S-400 missile system, as transactions with Russia risk triggering CAATSA (Countering America's Adversaries Through Sanctions Act).

At the press briefing, Gokhale said Modi and Trump agreed that they would meet at an early date to try and sort out issues pertaining to trade between the two countries.

"It was agreed that trade ministers of both countries would meet on an early date and would try to sort out these issues. Both US Trade Representative Robert Lighthizer and their Treasury Secretary Steven Mnuchin were in the room. Now, we expect an early meeting," he said.

"The Prime Minister did mention in particular that we have taken some action after the GSP (Generalized System of Preferences) was revoked. That was something which already happened and now we should look forward and see how we can resolve these issues. President Trump welcomed this idea," Gokhale added.

With regards to tensions brewing between the US and Iran, the Foreign Secretary said the primary focus was on ensuring stability in the region, not just in the backdrop of energy needs, but also to ensure the safety of the Indian diaspora in the Gulf.

"On Iran, the primary focus was on how we ensure stability there, as instability affects us in many ways, not just in a matter of energy needs, but also in terms of our large diaspora in Gulf, 8 million Indians in the Gulf and economic interests. The two leaders agreed that they and officials will continue to remain in touch to ensure that the region remains stable; that is in the interest of us and the US," he noted.

"On 5G, we were concerned to bring the focus on how can we leverage our market, our capabilities in design and technology of software, and our desire as to how to make this technology as part of Make in India. PM's real focus was on Make in India and the potential that this technology has to achieve this goal."

When asked if trade and defence tensions between the two large democracies can hamper their relationship, Gokhale said, "No one issue is going to impact the largest strategic relation between India and US which is deep and broad. We have some issues. We will work on it."

In the trilateral meeting held between US, India and Japan, Gokhale said the main topic of discussion was Indo-Pacific, how the three countries can work together in terms of connectivity, infrastructure, ensuring peace and security, and in terms of working together to build upon this new concept.