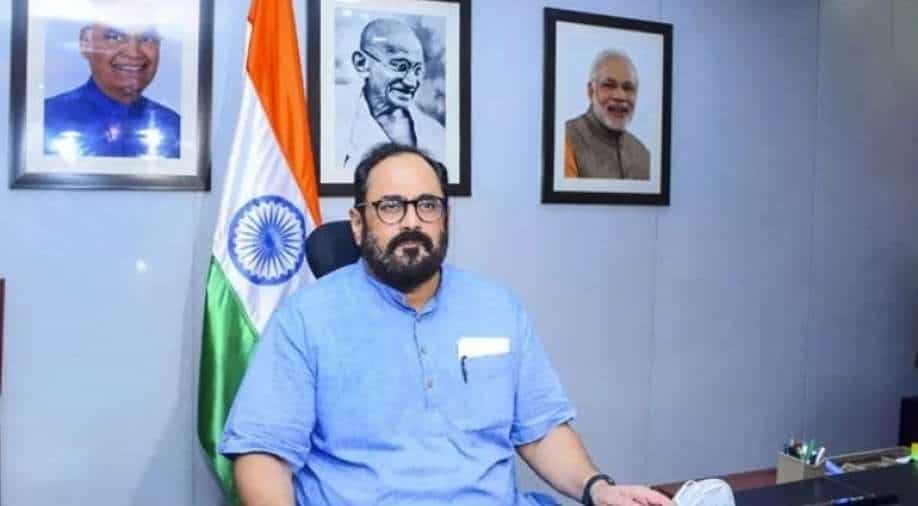 In this file photo, India's Minister of State for Electronics and Information Technology Rajeev Chandrasekhar can be seen. Photograph:( PTI )

Calling for a self-reliant, or 'atmanirbhar' internet for India, India's Minister of State for Electronics and Information Technology Rajeev Chandrasekhar has accused big tech platforms of weaponsing the internet during the Russia-Ukraine crisis.

His comments came just days after YouTube blocked WION over its coverage of the Russia-Ukraine war.

Chandrasekhar said this highlights the sweeping powers of social media giants and how they preside over the ''splinter-net.'' He said the “Atmanirbhar internet,” will reduce dependency on services being provided by these global firms.

Chandrasekhar said there is a need to rethink local laws in order to de-risk Indian internet and make it harder for Big Tech businesses to be weaponised in any circumstance. India is readying a new cybersecurity and data governance framework.

According to Chandrasekhar, “If we were depending on SWIFT alone, we are gone. But we have UPI, fintech platforms in India that have reduced our reliance on a SWIFT type of an international money transfer platform. We are seeing through our thinking of Atmanirbhar Bharat that we should not depend on Indian internet being controlled or influenced by these big tech platforms alone.”

“Two phenomenon are very visible: one is weaponisation of the internet of which we were aware of in some sense. The second is the phenomenon of the splinter-net. The internet is increasingly being splintered, driven by power of some Western countries. These platforms have now become dominant and in the event of a conflict between two sovereigns, they are being weaponised and there are no laws that would prevent this.”

“It is disturbing that internet intermediaries aren’t doing enough to combat cybercrime and hacking attacks. The use of sanctions to cut off access to internet is disturbing. It is quite a troubling precedent. These recent events strengthen India’s case for data localisation, national champions, resilient internet network architecture, native open APIs (application programming interface) and a strong cyber security command centre,” Chandrasekhar told The Indian Express.

“It is validating our thinking in terms of a new digital law, the need for a data governance framework. We will basically create a framework which will have the data protection law, a digital law and other cyber security statutes. Architecturally, we want to build the cyberspace jurisprudence rather than doing it piecemeal or in catch up mode,” he added.

“The platforms are now controlling the access to the internet in many ways, be it through monopolies of search engines, duopolies of app stores, or devices.”