Russia-Ukraine conflict: How is India responding, as Indian students are stuck? 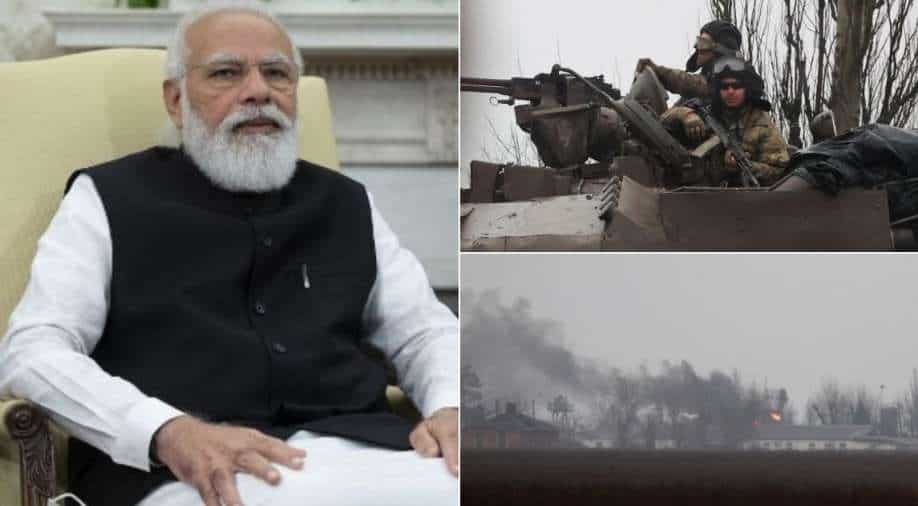 (left) File photo of Indian PM Narendra Modi. How is India planning its response considering there are several students in Ukraine? Photograph:( Reuters )

Reports also mentioned that Russia has landed troops on its coast after President Vladimir Putin authorised what he called a special military operation in the east.

Amid escalating tensions, high-level meetings are underway in India's Ministry of External Affairs to discuss the contingency plans that are being put into operation to activate alternate routes to bring back stranded citizens from Ukraine, sources claimed.

Ukrainian authorities closed the airspace to civilian flights citing a high risk to safety and given airspace closure, alternate evacuation routes are being activated.

Additional Russian speaking officials have been sent to our Embassy in Ukraine and are being deployed in countries neighbouring Ukraine.

Sources further informed that the Indian Embassy in Ukraine is functional and its advisories should be followed carefully.

High-level discussions are underway at MEA. How is India planning its response considering there are several students in Ukraine?@PriyankaSh25 talks to @sidhant for details

Meanwhile, a special Air India flight returning from mid-air as Ukraine airspace is closed due to notice to airmen (NOTAM) as war has been started between Russia and Ukraine.

"Air India flight AI1947 is coming back to Delhi due to NOTAM at, Kyiv, Ukraine," Air India informed.

Previously, India's permanent representative to the United Nations, TS Tirumurti at the UNSC meeting on Ukraine said, "We call for an immediate de-escalation."

He added that the situation is in danger of "spiralling into a major crisis" and if not handled carefully, it may undermine security, adding the security of all parties should be taken into account.

"Over 20,000 Indian students are in Ukraine, we are facilitating the return of all Indian nationals including students as we may be required," Tirumurti said.