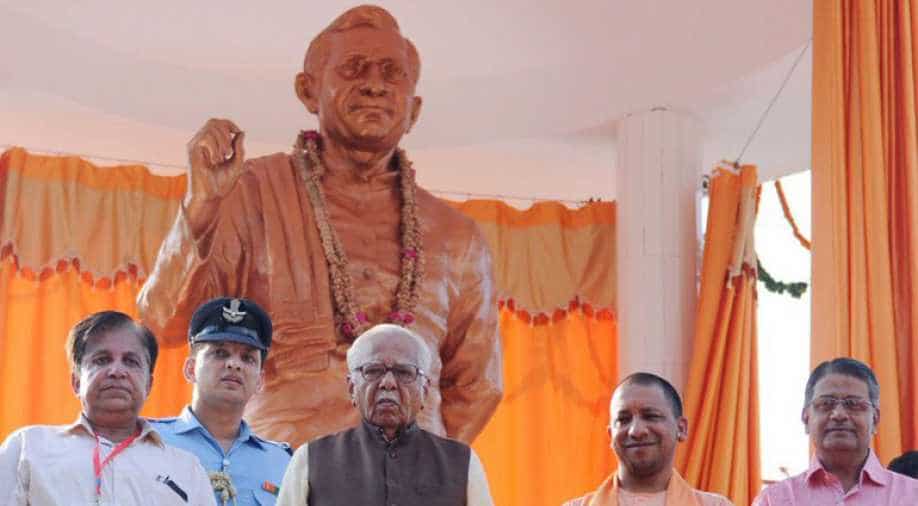 The Uttar Pradesh culture directorate has issued an order to the Agra district administration, asking them to replace one of the two statues of Dr Bhim Rao Ambedkar inside the Agra municipal corporation premises with that of Pandit Deendayal Upadhyay

The Uttar Pradesh culture directorate has issued an order to the Agra district administration, asking them to replace one of the two statues of Dr Bhim Rao Ambedkar inside the Agra municipal corporation (AMC) premises with that of Pandit Deendayal Upadhyay.

"The move is not aimed to insult or hurt the sentiments of Dalits but to motivate them. Pandit Deendayal Upadhyay was a champion of Dalit rights and his statue would make the community proud," the BJP lawmaker said.

"There are two statues of Ambedkar in the premises of AMC. While one was inaugurated by former chief minister Mayawati during the BSP regime, the other is an old one, which can be restored and installed somewhere else. Pandit Deendayal Upadhyay's statue can replace it," he added.

Zee News has a copy of the order dated April 25 and signed by deputy director Ajay Kumar Agarwal.

The order directs the Agra district magistrate and senior superintendent of police to keep tab on law and order situation in case there is protest after the installation of statue.

Dalit councillors have taken a strong objection on the state government’s order.

"The Dalit community will take to streets if the statue is installed. If they had objection on two statues of Ambedkar inside AMC premises, they should have raised the objection earlier. But replacing it with one of the BJP icons is a great provocation,” said Dharmveer Singh, councillor of Ratanpura, a reserved SC/ST ward.

Over 90% employees in Agra’s civic body are Dailts and 24 of 100 councillors are from the Scheduled Caste (SC)  community.

"This act will create more social gap and there will be repercussions. The civic body must prevent it,” he said.

Meanwhile, AMC commissioner Arun Prakash said, “The statue will only be replaced after discussion on the civic assembly floor with mayor and councillors.”