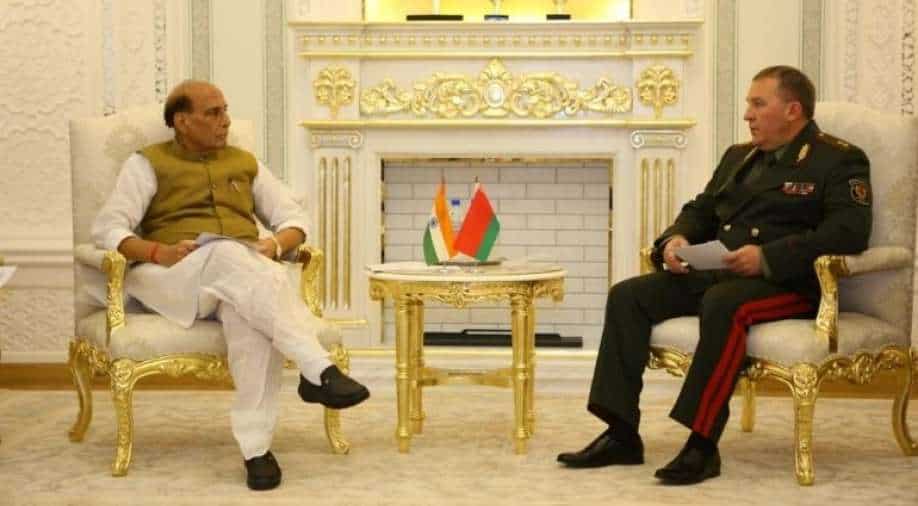 Defence Minister Rajnath Singh on Wednesday held bilateral talks with his Belarusian counterpart Lt Gen Viktor Khrenin on the sidelines of a conclave of the Shanghai Cooperation Organisation (SCO) in Dushanbe.

In his address at the conclave, Singh is expected to pitch for concerted efforts to deal with terrorism and other security challenges facing the region.

The defence minister is also expected to meet his Tajik counterpart Col Gen Sherali Mirzo to discuss bilateral as well as other issues of mutual interest.

Tajikistan is chairing the SCO this year and hosting a series of ministerial and official-level meetings.

The SCO, seen as a counterweight to NATO, is an eight-member economic and security bloc and has emerged as one of the largest transregional international organisations. India and Pakistan became its permanent members in 2017.

The SCO was founded at a summit in Shanghai in 2001 by the presidents of Russia, China, the Kyrgyz Republic, Kazakhstan, Tajikistan and Uzbekistan.

India has shown keen interest in deepening its security-related cooperation with the SCO and its Regional Anti-Terrorism Structure (RATS) that specifically deals with issues relating to security and defence.

India was made an observer at the SCO in 2005 and has generally participated in the ministerial-level meetings of the grouping which focus mainly on security and economic cooperation in the Eurasian region.