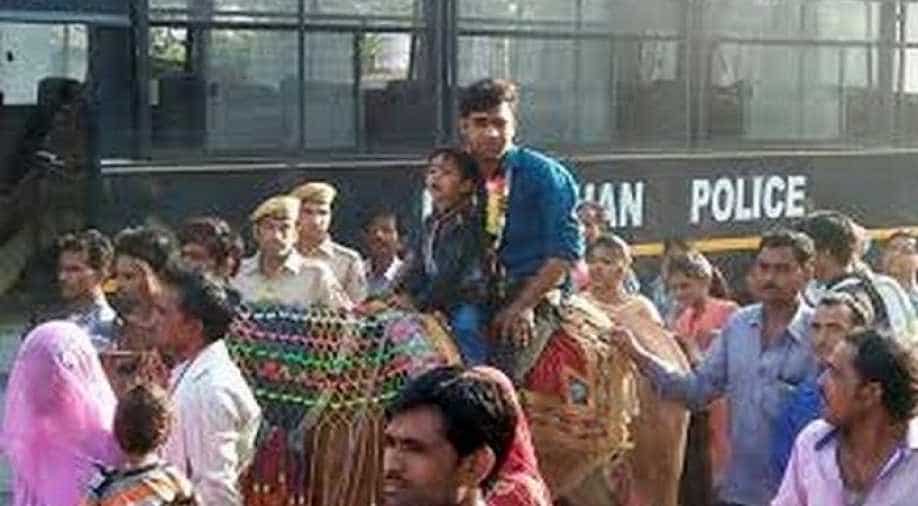 A Dalit man on Sunday was beaten up and forced off a horse by a group of villagers a day before his wedding in Rajasthan.

The incident took place on Sunday night in Rajasthan's Govardhanpura village of Bhilwara district when stones were hurled at him and his friends were beaten up by villagers who were outraged over a scheduled caste groom riding a mare during the traditional ceremony of Bindoli.

As per reports, the groom alleged that most of the attackers were from the Gurjar community.

The police reached the spot and tried to stop the villagers but they forced the groom to get down from the horse and go back to his house.

An FIR has been lodged under IPC sections including 323 (punishment for voluntarily causing hurt), 341 (punishment for wrongful restraint), 354 (assault or criminal force to woman with intent to outrage her modesty) along with sections of the SC/ST Act.

Police said that a case has been registered under SC/ST Act and seven people have been arrested so far in this regard.

Reports of discrimination against Dalits are reported from different parts of India. On Sunday, to protest against discrimination and caste-based violence, hundreds of Dalits converted to Buddhism in Una district of Gujarat.

Previously a Dalit groom was asked to take a longer route to ‘avoid’ Thakur areas during the Kasanj incident.