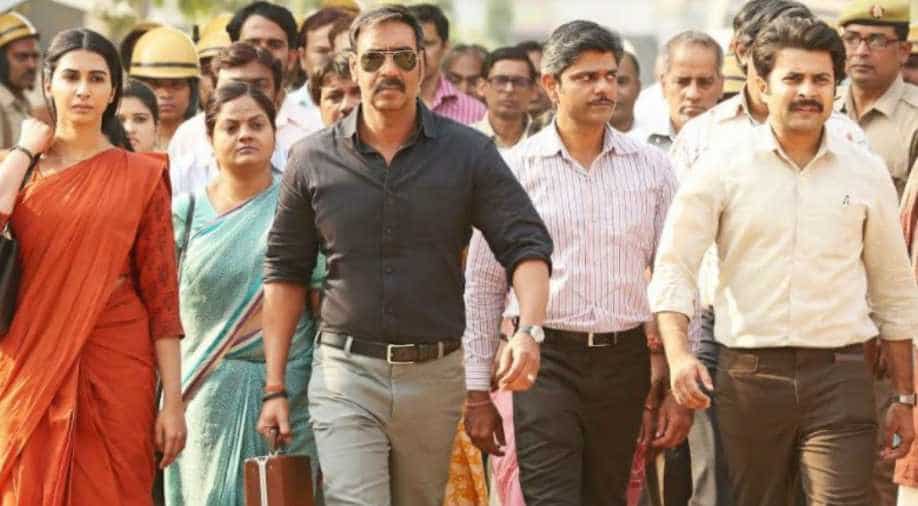 A still from the film Raid. Photograph:( Others )

It's a role that Ajay Devgn has played all too well in the past. An honest officer who will fight the odds in honour to stay true to his country and motherland. As a cop, or as an activist, Devgn has time and again played roles that are sometimes jingoistic in nature yet work immensely well with the audience. In his latest film Raid, directed by Rajkumar Gupta, Ajay Devgn plays an extension of some of the roles that he has played in the past. There is a sense of familiarity when the film begins.

Amay Patnaik, an Income Tax Officer has already travelled across the country for his honest work. Patnaik is an atheist, who worships Bharat Mata and abides by the law. So much so, that on being invited to an elite club for a round of drinks, he refuses to go inside because of his inappropriate footwear(rules should be followed) and once his host gifts him the right pair, he insists on paying. He even drinks his own, cheap liquor -because he only drinks what he can afford. Writer Ritesh Shah gives Devgn ample lines to prove how honest he is as a person- someone who will follow the rule book to the hilt.

On an anonymous tip-off, Amay gathers a group of officers to conduct an early morning raid at local MLA and semi-goon Rameshwar Singh's sprawling mansion. The house is locked down and no one is allowed to enter or exit the premises till Amay and his officers complete their investigations. His informer had insisted that he would find black money stashed inside Rameshwar's house so Amay is adamant to find the hidden money.

A still from Raid featuring Saurabh Shukla. (Others)

The group literally turns the house upside down in order to look for hidden wealth but find nothing. And then while the raid is still on, Amay gets clues from within the house and sometimes even from some house members who unknowingly give away details about the house and its architecture. And while the officers go inside the house hoping to complete in the raid in a day's time, it spills over days making it the longest IT raid in the history of the country as the group grapples to calculate the cash, jewellery and other valuables items are unearthed from all sorts of place within the house.

Now, the film is based on a real-life incident that took place in 1981, a time when media was not so aggressive with its coverage and no mobile phones existed. It was also the time when such massive raids perhaps shook the conscience of most in the country, unlike present day where scams and bank frauds have become common. With a such a background, co-writers Gupta and Shah, weave a gripping tale of how a group of mere government officer dared to enter into a land of goons and unravel so much of hidden wealth.

Now, most of the story takes place within the confinement of Rameshwar's palace so to keep the viewers engaged throughout can be a challenge. Raid does slip in parts, especially when Ajay Devgn is harping about how honest a man he is with an absolutely straight face. But it also picks up in the next moment especially in the scenes that have Saurabh Shukla in them.

Shukla, in fact, is one of the high points of the film. But he is that in almost all his films, no matter what the length of the film is. In Raid, Shukla plays the antagonist who is smug and is aware of his power. While most of the family start losing their cool at the intrusion of their space, its Shukla who keeps egging Devgn's character to look for more - aware that he won't find a thing. And when he finally does, Shukla plays out completely different emotions with absolute ease. Some of the scenes where Devgn and Shukla have face-offs are superb with both maintaining their character's tone accurately.

Devgn shines too in certain scenes but since we have seen the actor playing similar roles, it may give you a sense of Deja Vu. He delivers, no doubt. But his restraint performance may not seem new to his fans, that's all.

The supporting cast is good too. Amit Sial, as Lallan, the corrupt official who keeps hampering the work of his colleagues and Pushpa Joshi as Rameshwar’s toothless mother, who inadvertently gives Amey clues about the household are particularly good.

The only unnecessary character in the entire film is, unfortunately, Malini, Amay's wife, played by Ileana D'CRuz. While the story has her as Amay's strength and emotional anchor, her scenes with Devgn don't really help the narrative much. In fact, two romantic songs right in the middle of a thriller raid just slacken the pace of the film.

Stills from the song Nit Khair Manga from the movie 'Raid'. (Source: YouTube) (Others)

With an overdramatised, stretched climax, the second half of the film appears to be long but overall the suspense as to who gave Amay so much information about the house remains intact till the end.

A word on the camera work by Alphonse Roy who uses multiple aerial shots to make the viewers understand the scale of the situation in certain scenes.

Go watch Raid this weekend, for Devgn who does what he is good at, for its engaging screenplay and for the incredible Saurabh Shukla who never fails to impress.