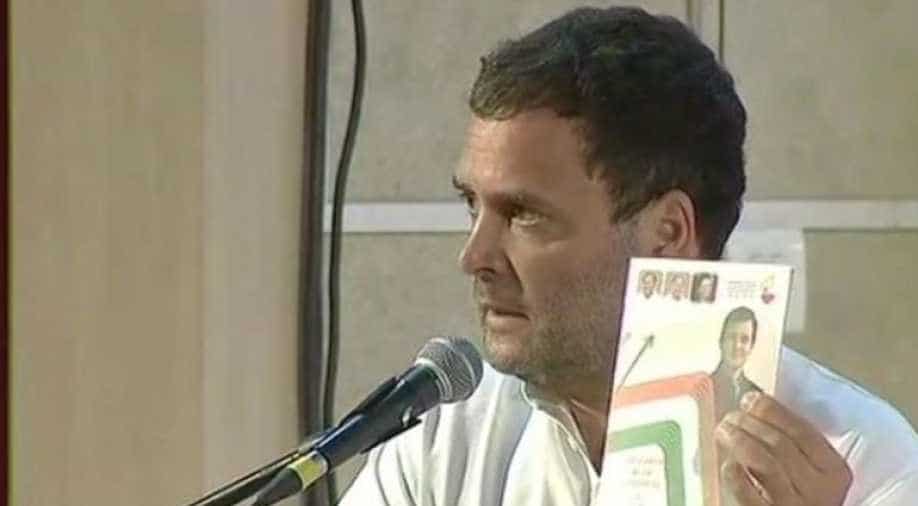 "Our manifesto is the voice of Karnataka, it shows Karnataka's sentiments" Rahul Gandhi noted during his address at TMA Pai Convention Hall in Mangaluru.

The Congress chief went on to say that his party believes in Basava's philosophy. Reacting to PM Modi's remarks made on the Congress yesterday during his live address to  Karnataka BJP candidates, Rahul Gandhi noted that the Congress stands for truth.

He lashed out at the BJP saying that the BJP that does not stand for what they say and promise. "In our last manifesto, 95 percent of things we said have been done," Gandhi said.

"The Prime Minister guaranteed a corruption-free government but we see scams after scams," Gandhi exclaimed. He alluded to the multi-billion dollar PNB scam and fraudsters like Nirav Modi who were able to execute such scams "under PM Modi's rule".

Mangalore: CM Siddaramaiah, Congress President Rahul Gandhi and other senior party leaders launch Congress party's manifesto for #KarnatakaElections2018. Rahul Gandhi says,'Whatever the manifesto says will be done, 95% of what was mentioned in the last manifesto has been done.' pic.twitter.com/p5J81iRW7R

"Why would you want to give votes to corrupt Reddys?" Gandhi reasoned.

Yesterday, Prime Minister Narendra Modi addressed BJP candidates for the upcoming Karnataka assembly polls. He stated his party's agenda for Karnataka is "development that is fast-paced and all-rounded".

The PM accused the Congress of hiring foreign companies for spreading lies.

Rahul Gandhi-led Congress and the Bhartiya Janta Party are currently in full swing to lure the voters for the upcoming Karnataka assembly elections.

The polls to the 224-member Karnataka Assembly will be held on May 12. The southern state is slated to witness a three-corner contest involving the ruling Congress, the BJP and the H D Deve Gowda-led JD(S). The result of the polls will be announced on May 15.