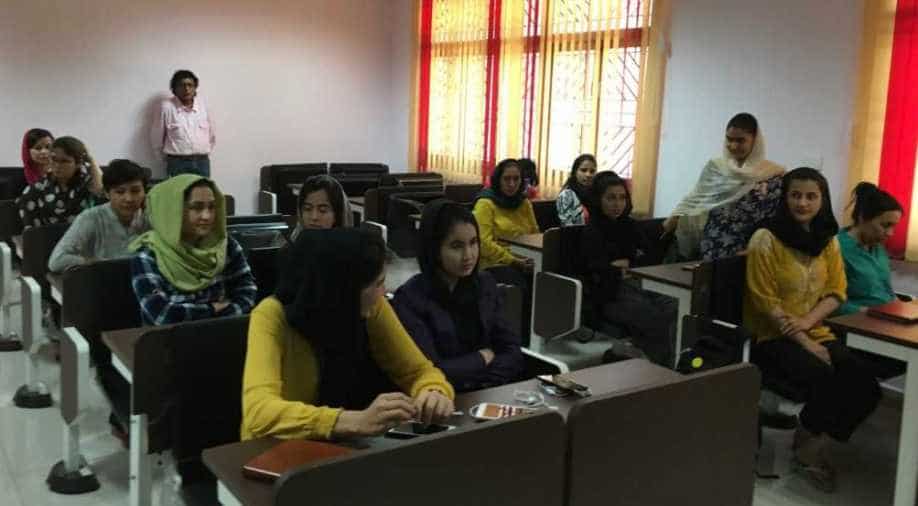 Afghan women journalists, aged between 26 and 33, are being trained by the faculty at the National Institute of Technical Teachers Training and Research (NITTR).  Photograph:( WION )

As Afghanistan had stints of democracy interspersed with Taliban rule, women journalists face challenges not only in their society at large but also from their very own families.

They travelled the road less taken, chose to endure all hardships to break the stigma and re-write the norms. Some of them left their families at a young age, some of them lost their colleagues to violence, yet they persist and pursue their calling. The latest hurdle that they want to cross is that of the language barrier and that’s what had brought them to India.

24 Afghani women journalists are in Chennai to attend an eight-week training program that aims to impart English communication skills. The initiative comes under the Indian Technical and Economic Cooperation Programme and aims to take forward the existing diplomatic and strategic relationship and improve people-to-people contact.

The women journalists, aged between 26 and 33, have a wide-ranging experience under various roles in the print and broadcast media as presenters, writers, editors, technical directors. They are being trained by the faculty at the National Institute of Technical Teachers Training and Research (NITTR).

As Afghanistan had stints of democracy interspersed with Taliban rule, women journalists face challenges not only in their society at large but also from their very own families.

Speaking to WION, Wida Saghary, an Afghan journalist with over 12 years of experience said, “In the initial years, when we wanted to interview people in the bazaar, they hurled things at us and would gossip about women journalists. It was difficult for families to send daughters to join the media.”

She added that while there were quite a lot of journalist training centres in the capital city Kabul and the nearby provinces, few journalism aspirants even travelled to India, Turkey, Russia, America and Europe for their academic pursuits.

Diba Selgai, a social media officer said that many women aspire to appear on the screen, but they face the risk of being spoken ill about and being perceived in a negative manner. She added that when women journalists defy the status quo, it has a serious democratic effect on society. Rather than having democracy imposed from outside, working women can show the way and bring in democracy from within the society, she said.

The women also spoke about their employer which had over 50 per cent women workers in main positions as compared to the industry average of about 20 per cent women. A journalist recollected her roots in Laghman province, a Taliban stronghold, and how her uncle warned her father about God not accepting his prayer due to his daughter’s education and career choice.

There were also instances of women being attacked by their kith and kin for the path they chose, the most recent being the case of a Pashtun journalist who was killed by her husband, recalled the media professionals.

However, the journalists expressed optimism about how their country is evolving. They said nowadays, it is comfortable to work outside and that they have the support of their families who are supporting the girls and not hesitating to send them abroad for studies.

Accepting the responsibility of the media in transforming the image of the country, they said that it is important to break free from the stereotypes of Burkha, war and Taliban.

Speaking of their time in Chennai, the women said that it was refreshing and empowering to see women working late in the night, going shopping, working as vendors. They wished for a similar transformation in their society, where it is generally considered unsafe for women to venture out in the nights.

Outlining the initiative of the Indian government to support developing nations and their citizens, Dr Sudhindra Nath Panda, Director of NITTTR said, “The ITEC programme was started in 1964 and cover over 150 countries. Our missions abroad have been taking care of the VISA formalities of the students/professionals and the travel, course, accommodation expenses are funded by the Indian government.” He added that so far 95 Afghan citizens have attended the programme, of which over 40 were women.