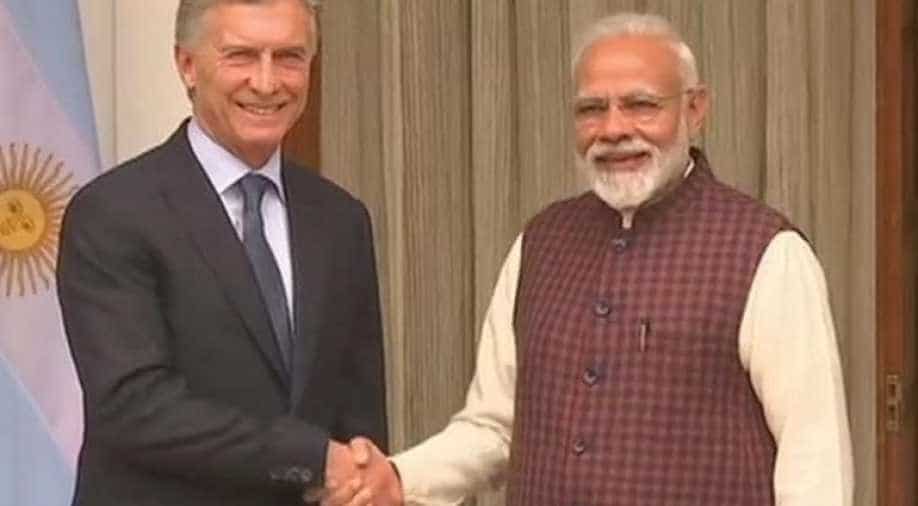 Prime Minister Narendra Modi also slammed terror and said, "terrorism is a threat to world peace and stability. Pulwama terror attack shows time for talks is over. He said the world should take strong action against terror and supporters of terror. "

Argentina, India on Monday came strong on the issue of terror on Monday. Argentina President Mauricio Macri is on a 3 day India visit and is the first foreign leader to visit India after the Pulwama terror attack last week that killed 40 CRPF personnel.

During the press statement, Argentinian President Mauricio Macri firmly condemned the Pulwama terror attack. He said, " I would like to pay my condolences to the victims of the cruel attack perpetrated just a few days ago. We firmly condemn, as we have done for the last 3 year. We condemn every terror attack. It goes against what we think should be health coexistence"

Prime Minister Narendra Modi also slammed terror and said, "terrorism is a threat to world peace and stability. Pulwama terror attack shows time for talks is over. He said the world should take strong action against terror and supporters of terror. "

Remember both India and Argentina are members of powerful G20 grouping. Last year Argentina became the first South American country to host the G20 summit. During the Buenos Aires G20 summit, it was announced that India will host G20 in 2022.

Both also issued "India-Argentina Special declaration to Fight Terrorism". In the declaration leaders "gave a call that no country must allow their territory to be used to launch terrorist attacks on other countries" and without taking Pakistan's name said, "terrorist safe havens rooted out in every part of the world."

The declaration affirmed their support for a "U.N. Comprehensive Convention on International Terrorism that will advance and strengthen the framework for global cooperation and reinforce the message that no cause or grievance justifies terrorism."

The Comprehensive Convention on International Terrorism or CCIT has called for a common definition of terror but lack of consensus at the united nation is making it passage difficult at the multilateral body. The cabinet committee on security (CCS) which met in the aftermath of Pulwama attack on Friday has called for the formation of an India led global consensus on CCIT.

India and Argentina signed ten MoUs in several areas, including Defence, Tourism, pharmaceuticals, Civil nuclear and agriculture. An MoU was also signed on Cooperation in Antarctica.