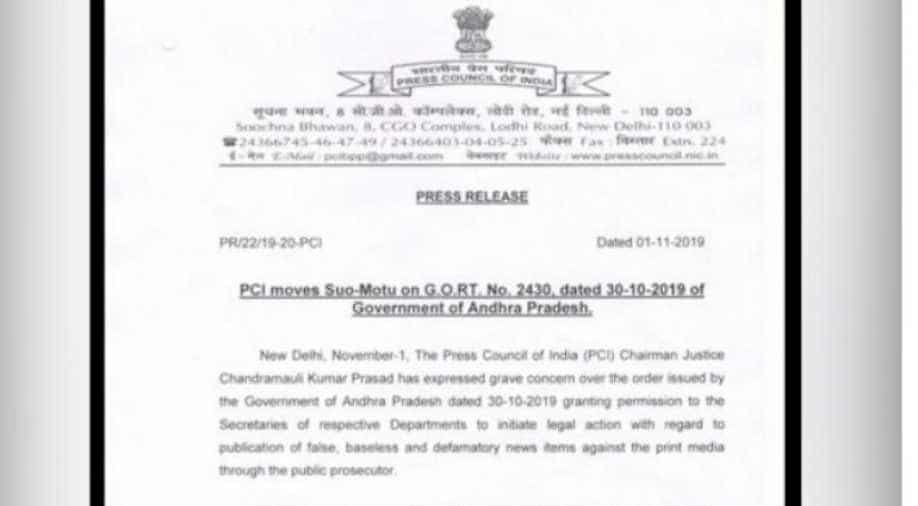 Statement of the Press Council of India Photograph:( ANI )

The Andhra Pradesh Government had on October 30 issued an order delegating powers to the secretaries of respective departments to lodge complaints and file appropriate legal cases through public prosecutor against false, baseless and defamatory news items published, telecast or posted in print, electronic and social media.

The Press Council of India (PCI) chairman Justice Chandramauli Kumar Prasad has expressed grave concern over the order issued by the Andhra Pradesh government granting permission to the Secretaries of respective departments to initiate legal action with regard to publication of false, baseless and defamatory news items against the print media through the public prosecutor.

"The Chairman is of the view that the threat to prosecute media personnel, in general, shall demoralize the journalists in large which shall have a severe bearing on the freedom of the press. Not only this the problems which the order in question seek to redress can very well be remedied by the Council itself," read a statement from the Press Council of India.

"While taking suo-motu cognizance of the issue, the Chairman has directed the government of Andhra Pradesh through its Chief Secretary and Special Commissioner (I&PR) to file reply statement in this matter," the statement added.

The YS Jagan Mohan Reddy-led Andhra Pradesh Government had on October 30 issued an order delegating powers to the secretaries of respective departments to lodge complaints and file appropriate legal cases through public prosecutor against false, baseless and defamatory news items published, telecast or posted in print, electronic and social media.

This was the advancement of the government order number 938 released in 2007, which empowered I&PR Commissioner to lodge a complaint and file defamation cases against publishers and editors.

Now the same powers are extended and delegated to the secretaries of respective departments."Instances have come to the notice of the government that certain print, electronic and social media are deliberately trying to tarnish the image of government officials by spreading false, baseless and defamatory news with malafide interest," the government order read.

"After careful examination of the matter, Government hereby accord permission to delegate powers to the Secretaries of respective departments to issue rejoinders, file complaints and lodge appropriate cases, if need be, through public prosecutor against defamatory news items published/telecast/posted in print/electronic/social media pertaining to their respective departments after following due process of law," it added.

Later, political parties accused the government over this order, while the government defending its actions by stating that this is a mere delegation of powers to department secretaries, which already existent with the I&PR Commissioner.

Former Andhra Pradesh chief minister N Chandrababu Naidu tweeted, "The right to question, criticize and showcase the failures of a government is fundamental to democracy. YS Jagan Mohan Reddy's government has today issued the draconian GO 2430 that aims to curb freedom of expression in Andhra Pradesh. This is meant to stifle people's voice on social media."In another tweet, he added, "Prodded by the YSRCP, the Police will now be able to foist false cases to harass media institutions and people who are showcasing the many failures of the government. If necessary, we will take the fight to the streets until this oppressive GO is cancelled!"

Senior BJP leader Lanka Dinakar also strongly condemned the "attack" on journalists and restrictions on media in the state."Article 19 of our Constitution allows freedom of speech and expression. It stands for the freedom of the fourth estate. Article 21 of the Constitution gives us the right to life and personal liberty," he said.

Dinakar added, "The state government has curtailed the voice of media by imposing conditions and restrictions''