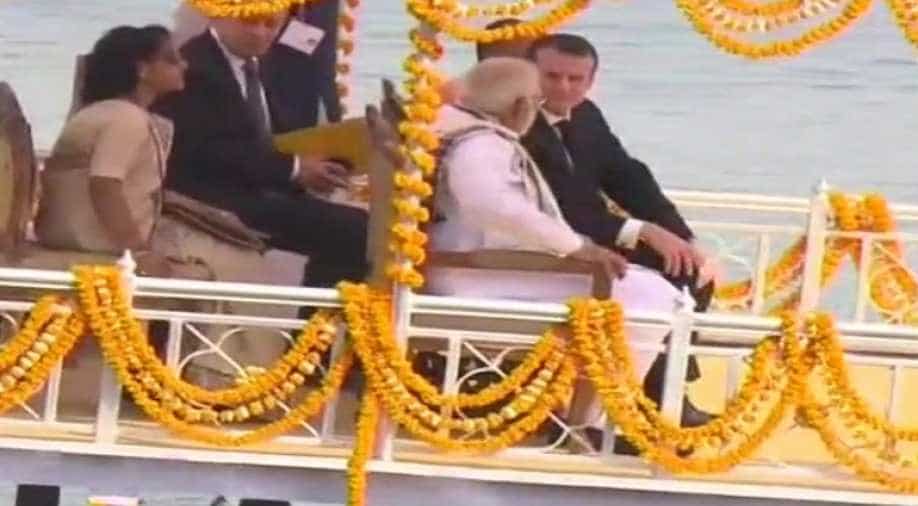 President Macron was given a traditional welcome before he took a decked-up boat which ferried him, PM Modi and the Uttar Pradesh Chief Minister between Assi and Dashwamedh ghats

French President Emmanuel Macron, who is on a four-day visit to India, today took a boat ride on the Ganga river with Prime Minister Narendra Modi and Uttar Pradesh chief minister Yogi Adityanath in Varanasi.

President Macron, who visited the Taj Mahal with his wife Brigitte yesterday, was given a traditional welcome with showering of flower petals, a Shehnai recital and chanting of mantras before he took a decked-up boat which ferried him, PM Modi and the Uttar Pradesh Chief Minister between Assi and Dashwamedh ghats.

Artistes enacted scenes from Ramleela and the episode of first sermon by Lord Buddha to his five disciples while people gathered in large numbers along the ghats waving flags of India and France.

Artistes also put up an impressive show before Macron and Modi from the open auditorium of the Deen Dayal Upadhyaya Trade Facilitation (DDU) Centre to the ghats. The two leaders walked hand in hand.

From the LBS International Airport, Macron reached the DDU centre where he visited the handloom and handicraft exhibition at the textile museum and witnessed "Chitrakoot", a play based on Hindu scripture Ramcharitmanas which was staged in the open auditorium. The play showcased the life of Lord Ram during his 14-year exile.

The French President, who arrived to the welcome tune of a 'shahnai' at the Deendayal Hastkala Sankul in Badalalpur, evinced a keen interest in the handicrafts and heritage of the culturally-rich city. He was given a live demonstration of the craftsmanship which has earned the city global recognition.

The French president was all the while accompanied by PM Modi who explained to his guest the various craft forms. He was also given a demonstration of how the world-renowned Banarsi saris were weaved.

The carpets of Bhadohi, which form another major industry of the region, also caught the interest the visiting dignitary. The two leaders also sat down briefly for a cultural troupe's display before leaving for their next destination.

Couplets of the Ramcharitmanas were recited and Ramlila was staged at Tulsi Ghat. The Ram rajyabhishek (anointment of Lord Ram) was performed by traditional artistes under the guidance of chief priest of Sankatmochan Temple, Vishwambhar Nath Mishra.

On reaching Assi Ghat, Macron was given a traditional welcome with showering of petals, a Shehnai recital and chanting of 'Shukla Yajurveda' mantras. He was shown the "Pushpak Viman" as sounds of "shankh" (conch shell) and "damru" (pellet drum), and chants of "Har Har Mahadev" reverberated through the air.

The folk music and dance performances were appreciated by Macron before the end of his boat ride at Dashaswamedh Ghat.

A 50-feet high cutout of Modi and Macron by local artists was put up at the Tulsi Ghat. Posters showing the two leaders waving and the tagline "welcome to the cultural capital of India" dotted the cityscape.

Macron arrived in Varanasi on Monday, where he was received by PM Modi and Yogi Adityanath.

Following the boat ride, Modi and Macron will flag off a train between Maduadih Railway Station in Varanasi, and Patna.

Earlier in the day, PM Modi and the French President inaugurated the 75 MW solar power plant in Mirzapur. The largest solar power plant in Uttar Pradesh has been built in collaboration with French solar power giant Engie Solar at Dadar Kala, some 25 kms from Mirzapur under the International Solar Alliance (ISA) programme.

On Sunday, India and France co-hosted the first summit of the International Solar Alliance.

On Saturday, India and France had inked 14 pacts, including in key areas of defence, nuclear energy and protection of classified information besides resolving to boost cooperation in the Indo-Pacific region.

During a joint press conference, PM Modi asserted that the synergy between the two sides was from land to sky.