PM Narendra Modi security breach: What we know so far about it 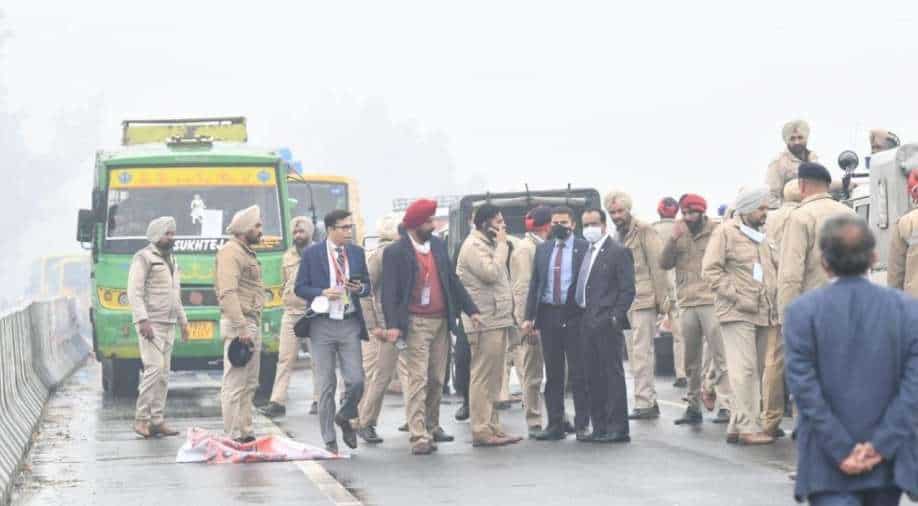 The Home Ministry has taken cognizance of the "serious security lapse" and has sought a detailed report from the Punjab government. Photograph:( Twitter )

The issue was discussed at a meeting of the Cabinet Committee on Security (CCS).Vice President M Venkaiah Naidu also called Prime Minister Narendra Modi on the security breach and voiced his serious concern.

Prime Minister Narendra Modi's cavalcade was stranded on a flyover, 30 kilometres from Hussainiwala in Punjab, after a group of protesting farmers blocked his route, sparking a political brawl between the BJP and the Congress on Wednesday.

Apart from the political conflict, it has spawned a debate about the security challenges that the Prime Minister may encounter if politics continues to jeopardise national security.

Here are the current details on this enflamed topic that we are aware of:

The farmer’s union, Bhartiya Kisan Union (Krantikari) has admitted that Prime Minister Narendra Modi’s convoy was delayed by its workers.

#WATCH | SSP Ferozepur asked us to vacate the road saying that the prime minister was going to the rally venue by road. We thought he was bluffing: BKU (Krantikari) chief Surjit Singh Phool pic.twitter.com/DvEoO94sTK

According to people familiar with the situation, the issue was discussed at a meeting of the Cabinet Committee on Security (CCS).

President Ram Nath Kovind voiced concern about Prime Minister Narendra Modi's security breach during his visit to Punjab the day before, when the two met and discussed the matter.

The president's secretariat claimed in a tweet that Kovind met Modi at the Rashtrapati Bhavan and received a first-hand report of the breach from him.

The tweet stated, "The president shared his concerns about the significant lapse."

The Ministry of Home Affairs has sought a detailed report on PM Modi's security breach in Punjab that took place on Wednesday.

"Such a dereliction of security procedure in the Prime Minister’s visit is totally unacceptable and accountability will be fixed, " Home Minister Amit Shah tweeted.

Amarinder Singh: Complete failure of law and order in Punjab

Former Punjab Chief Minister Captain Amarinder Singh on Wednesday called the security breach a "complete failure of law and order in the state.

"Complete failure of law and order in Punjab, chief minister and home minister, in particular. When you can't provide smooth passage to the PM of the country and that too, just 10 km from the Pakistan border, you have no right to stay in office and should quit, " he was quoted as saying by ANI.

PM Modi was not accompanied by the Punjab Chief Minister, DGP, or Secretary of State

According to official sources, the Punjab chief minister, chief secretary, and DGP did not receive or accompany PM Modi during his visit on Wednesday.