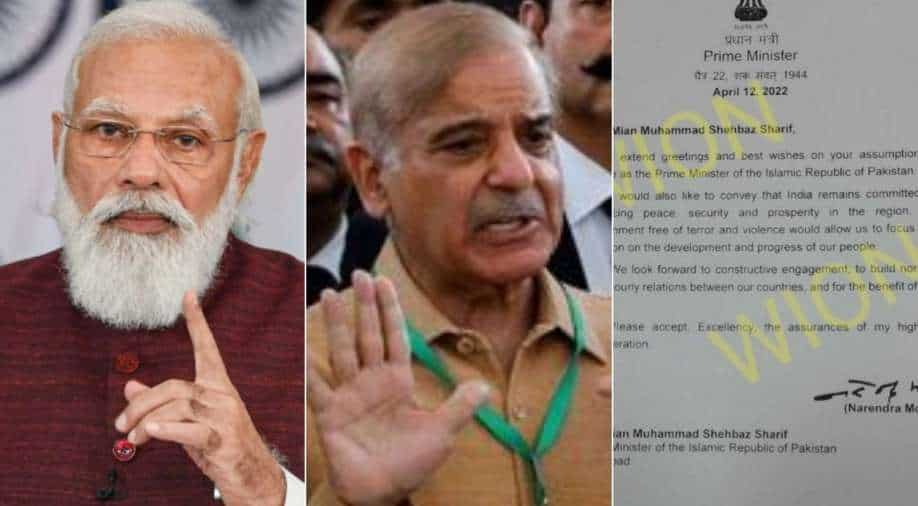 In a letter congratulating Pakistan's New Prime Minister Shehbaz Sharif, Indian PM Narendra Modi has asked him to build "normal neighbourly relations" between the two countries which will be for "the benefit of the region".

The letter was sent last week after PM Sharif took charge as the new Pakistani prime minister after Imran Khan lost a vote of confidence in the National Assembly.

The letter sent on April 12 called for "constructive engagement" reminding the Pakistani side that "India remains committed to advancing peace, security and prosperity in the region".

By protocol and tradition, Indian PMs have written/spoken to the incoming leader of Pakistan. In 2013, the then Indian PM Manmohan Singh had written to then-PM Nawaz Sharif and in 2019, PM Modi had spoken to then-PM Imran Khan after his victory in the elections.

PM Modi in the letter to the new Pakistani PM also raised the issue of terror calling for "an environment free of terror and violence" which would allow "us to focus our attention on the development and progress of our people".

New Delhi has multiple times raised the issue of cross border terrorism from Pakistan and Islamabad's support to anti-India terror groups like Lashkar-e-Taiba and Jaish-e-Mohammed. Pakistani PM Shehbaz Sharif had reciprocated and written back to PM Modi on Saturday (April 16). In his letter, PM Sharif had called for "meaningful engagement" between the two countries but linked it with the "resolution of all outstanding disputes, including the core issue of Jammu and Kashmir".

While the comments on Kashmir are a reiteration of Islamabad's long-standing policy, the lack of rhetoric seen under Imran Khan's Prime Ministership could become an opening for any future peace talks.

In the letter, Shehbaz Sharif, who has also been the longest-serving chief minister of Pakistan's Punjab province said, "We believe that peaceful and cooperative ties between Pakistan and India are imperative for progress and socio-economic uplift of our people and the region".

In the letter mentioning the issue of terror, he said, "our sacrifices and contribution in fighting and eliminating terrorism are well known and globally acknowledged."

Since taking charge, both sides have seen exchanges on Twitter as well. On April 11 PM Modi had tweeted a congratulatory message to Sharif, who had reciprocated with a message stating that Pakistan desires peaceful and cooperative ties with India, on April 12.

No formal talks have happened between India and Pakistan for years now. After India removed special status for the erstwhile state of Jammu and Kashmir, Pakistan had suspended train and road linkages and recalled its envoy.

Currently, Indian and Pakistani missions in their respective countries work at half the strength and at the deputy envoy level. Pakistan also suspended trade ties, barring Pharma products.