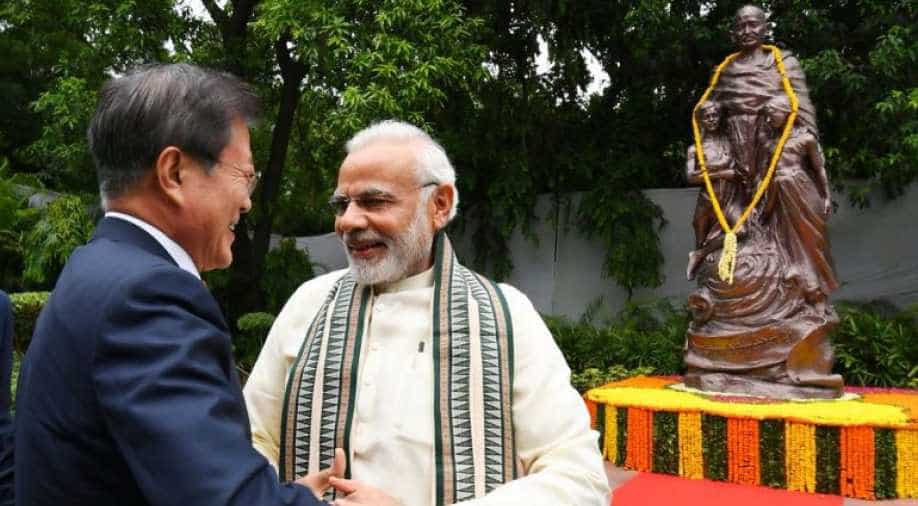 During his visit in the country, PM Modi will address India-Korea Business Symposium, launch India-Korea Startup Hub, unveil a bust of Mahatma Gandhi at the Seoul Campus of the Yonsei University, pay respect at the National Cemetery in Seoul and interact with the Indian community in the country.

As Prime Minister Narendra Modi visits South Korea from February 21 to 22, his 30-hour visit to the North East Asian country will see many engagements with Korean leadership, businesses and other stakeholders.

PM Modi will have a bilateral meeting with South Korean President Moon Jae-in on the second day of the visit in the Blue House, the official residence of the South Korean president.

Briefing the media ahead of the visit, Secretary East in the Ministry of External Affairs Vijay Thakur Singh said, "We expect a substantive agenda for discussion which would cover areas of bilateral cooperation, regional and global issues of mutual interest. The two leaders will also have an opportunity to review follow up action which will be in pursuance of their shared vision for people, prosperity, peace and future"

During his visit in the country, PM Modi will address India-Korea Business Symposium, launch India-Korea startup hub, unveil a bust of Mahatma Gandhi at the Seoul Campus of the Yonsei University, pay respect at the National Cemetery in Seoul and interact with the Indian community in the country.

About 11000 Indian nationals are living in South Korea with 1000 more pursuing postgraduate and Ph. D programmes in the country.

PM Modi will gift a sapling of Holy Bodhi Tree to the people of Kimhae. Kimhae city has a historic connect with India since 48 CE when Princess Suriratna of Ayodhya went there and started a dynasty after getting married to Korean King Suro. Princess Suriratna is known as Heo Hwang-ok in South Korea.

To highlight the "cultural and historical connect" between the two countries "the Prime Minister will be gifting a sapling of the Holy Bodhi Tree to the people of Kimhae through their mayor, " Secretary east said.

The First Lady of South Korea, Kim Jung-Sook visited Ayodhya in November of 2018 to participate in the ground-breaking ceremony of Queen Suriratna Memorial in the city.

PM to be honoured with Seoul Peace Prize

During the visit, he will be honoured with Seoul Peace Prize. The Seoul Peace Prize Cultural Foundation had announced in October 2018 the decision to award Prime Minister Modi with the prize for 2018 in recognition of his dedication to international cooperation, global growth and human development. Previous recipients of the award include German Chancellor Angela Merkel and  United Nation chief Ban Ki-Moon and Kofi Annan.

North Korean in the focus

The visit comes even as North Korean leader Kim Jong-un is all set to met US President Donald Trump for the second US North Korea summit in Vietnam on February 27 and 28. They met last year in Singapore for the first summit.

Asked about if any discussion on North Korea will take place, Secretary East said, "We have a very multifaceted relationship with Korea. We discuss issues of mutual interest, regional and global issues. The conversation which is going on with the DPRK (North Korea) is an important conversation. India welcomes discussions and dialogues which will help in reducing tensions and paving the way for peace and reconciliation in the Korean Peninsula."

Without naming, Pakistan secretary said, "We hope that the resolution of the Korean Peninsula will take into account and address our concerns about proliferation linkages in India’s neighbourhood."

It is widely believed that Pakistani nuclear physicist AQ Khan had given sensitive information on Uranium enrichment to North Korea in exchange of missile technology with approval from the former prime minister of Pakistan Benazir Bhutto.

PM Modi had visited South Korea in May 2015. South Korean President Moon Jae-in visited India in July 2018. During his visit, he along with PM Modi inaugurated the new manufacturing facility of South Korean major Samsung in Noida which is the largest mobile phone manufacturing plant of the company in the world. After President Moon's election victory in 2017, PM Modi was the fourth international leader to congratulate him.

Many South Korean companies are household names in India. Indian exports to Korea accounted for $ 2.91 billion and imports for $ 8.707 billion during January-July 2017, marking a growth of 26 per cent and 30.1 per cent. Major Korean companies such as Samsung, Hyundai Motors and LG have made major investments in India.