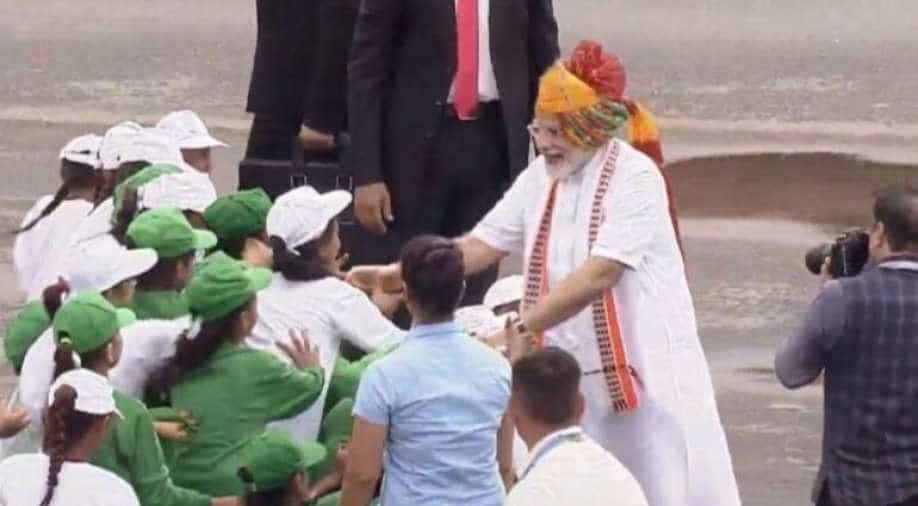 Modi said he has also cracked down on sections of the bureaucracy which sought a delay in implementation of projects and were allegedly involved in graft.

Prime Minister Narendra Modi on Thursday said with the abrogation of Article 370 and 35A in Jammu and Kashmir, the dream of "One Nation, One Constitution" has been realised, as he lashed out at the opposition speaking against the move, asking if they felt it was so necessary why didn't they make it permanent in the past 70 years.

Here are the highlights of PM Modi's Independence Day speech

"We do not believe in creating problems or prolonging them. In less than 70 days of the new Government, Article 370 has become history, and in both Houses of Parliament, 2/3rd of the members supported this step We want to serve Jammu, Kashmir, Ladakh," the PM said.

Modi also told the nation that it was essential for his government to establish a Jal Shakti Ministry, as nearly half of the households in the nation do not have piped water connection.

"India understands the importance of water conservation and thus, a new ministry for Jal Shakti has been created. Steps have been taken to make the medical sector even more people-friendly," he said.

Modi said he has also cracked down on sections of the bureaucracy which sought a delay in implementation of projects and were allegedly involved in graft.

"Such officers were told to leave now. Now the nation wants to develop on a fast speed. There is no place for them to obstruct the pace of development," he said, referring to the recent orders issued by his government to forcefully retire officials under various Ministries.

On black money and corruption, Modi said his government is continuously striving towards eliminating the menace and extract the money illicitly hoarded by corrupt individuals and firms.

Modi also reiterated his vision of "ease of doing business", claiming that his government has been constantly removing obsolete laws which serve no purpose than to embroil entrepreneurs in red tape.

"I always ask this question..can we not reduce the interference of Governments in people's lives? Let our people have the freedom to follow their own aspirations. We have abolished a lot of laws," he said.

The Prime Minister further added that he would like to move beyond ease of doing business. "The government wants to provide of 'ease of living' to the people," he added.

Linking the adverse living standard to the "population explosion", Modi said the need of the hour is to have a greater discussion and awareness on family size. Those who restrict the number of offsprings are actually doing a service to the nation, the PM further said.

"Population explosion in the country will create various problems for the coming generations. Those who follow the policy of small family also contribute to the development of the nation, it is also a form of patriotism," he said.