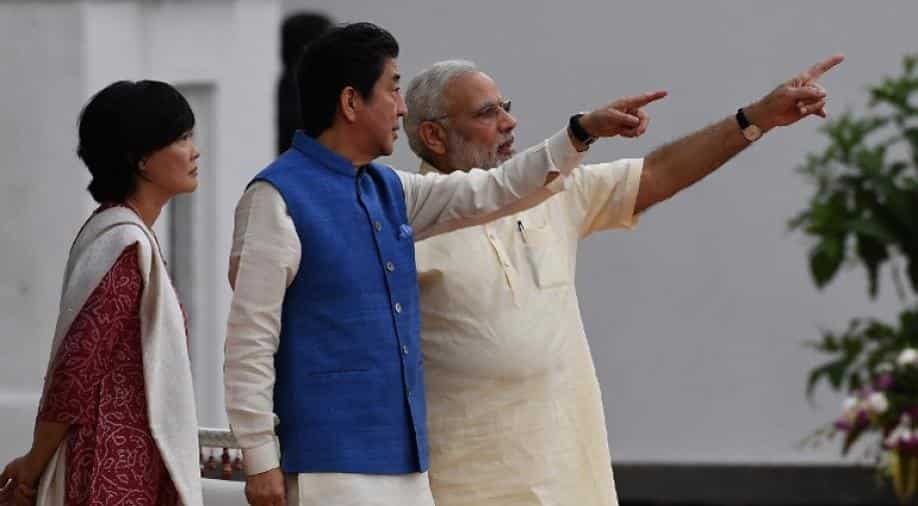 Calling PM Modi as his most 'dependable' friend, Shinzo Abe said that together with the Indian leader, he would like to strengthen bilateral cooperation to realise a free and open Indo-Pacific.

Calling PM Modi his most "dependable" friend, Shinzo Abe said that together with the Indian prime minister, he would like to strengthen bilateral cooperation to realise a free and open Indo-Pacific.

Indian media reports cited Abe as saying India was driving the region and the world's prosperity as a global power.

He also called PM Modi an "outstanding leader of his great country" and added that he had always believed and stated that the relationship between Japan and India is blessed with the largest potential in the world.

"We share a big win-win potential in all areas and Japan remains committed to supporting India's economic growth and Prime Minister Modi's Make in India initiative through high-speed rail, subways and other infrastructure, mobilising Japan's world-leading technologies," he said.

PM Abe: I heartily welcome Prime Minister @narendramodi of India as he visits 🇯🇵. I lost no time taking him to the lakeside at Lake Yamanaka, where the autumn leaves are in their glory. After this, I will invite him to my summer house, where only the two of us will dine together. pic.twitter.com/go4BoMTwz5

"Prime Minister Modi, who is currently visiting Japan since yesterday, is one of my most dependable and valuable friends. On behalf of the entire Japanese government, I have the pleasure of extending him the warmest hospitality," the Japanese leader's message read.

"Together with Prime Minister Modi, I would like to further strengthen Japan-India cooperation to realise a free and open Indo-Pacific," Abe said.

The Japanese prime minister also said that the friendship between Japan and India will enhance further after Japanese Shinkansen bullet train starts running between Mumbai and Ahmedabad.