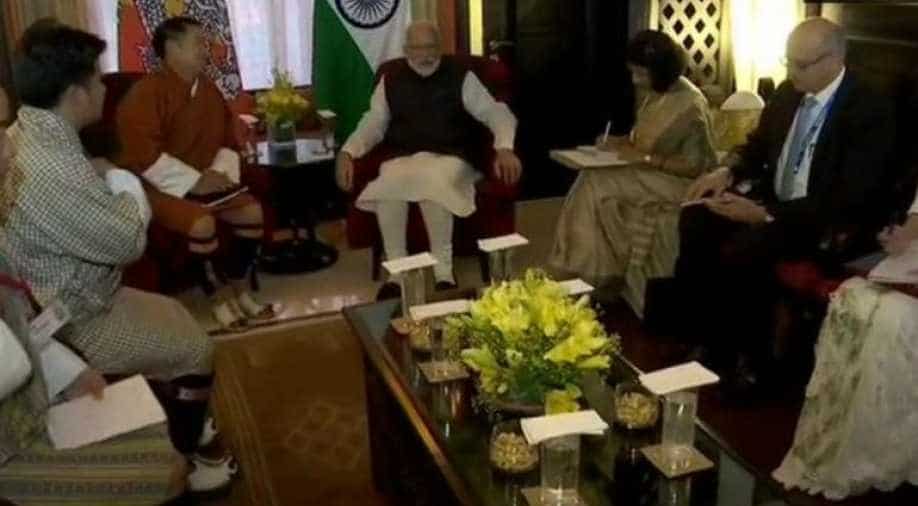 Addressing students and parliamentarians at the Royal University of Bhutan earlier today, Modi stressed that historical, cultural and spiritual traditions have created unique and deep bonds between the two countries.

Prime Minister Narendra Modi who is on a two-day official visit to Bhutan, met Dr Pema Gyamtsho, Leader of the Opposition of Bhutan's National Assembly, on Sunday.

PM @narendramodi met with Dr. Pema Gyamtsho, Leader of the Opposition of the National Assembly of Bhutan. Strong bilateral relationship enjoy support across the entire political spectrum in Bhutan. pic.twitter.com/1E9oBlnaha

Addressing students and parliamentarians at the Royal University of Bhutan earlier today, Modi stressed that historical, cultural and spiritual traditions have created unique and deep bonds between the two countries.

The Prime Minister reiterated that India is seeking to cooperate with Bhutan in sectors beyond the traditional ones like hydropower.

Following the address, Modi visited the National Memorial Chorten, where he offered 'khaddar' and lit butter lamps. The monument honours the third King of Bhutan or the 'Druk Gyalpo', Jigme Dorji Wangchuck.

"Felt humbled after paying my respects at the National Memorial Chorten, which honours the late Third Druk Gyalpo, who was a stalwart committed to peace, harmony and sustainable development," the Prime Minister tweeted after his visit.

Modi arrived in Bhutan on Saturday for an official visit aimed at further enhancing India's relations with its Himalayan neighbour.

The main highlights of the visit were the inauguration of the 720 megawatts (MW) Mangdechhu hydroelectric power project, along with the remote launching of ISRO's Ground Earth Station.

Nine Memorandums of Understanding (MoUs) and one power purchase agreement were exchanged between India and Bhutan in the presence of Modi and his Bhutanese counterpart Lotay Tshering.

Modi will leave for New Delhi from Paro on Sunday afternoon after wrapping up his bilateral engagements.