Important for world community to come together to fight challenge of terrorism and radicalisation: PM Modi 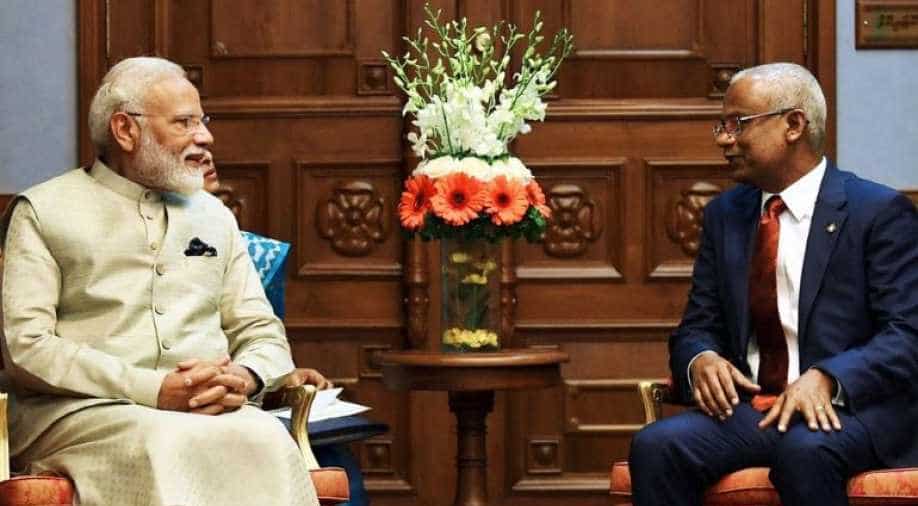 India on Saturday reaffirmed its ties with the Maldives with Prime Minister Narendra Modi saying that New Delhi will always stand with the Indian Ocean archipelago and give it utmost priority.

Modi in his address after holding bilateral talks with country's President Ibrahim Mohamed Solih, said, "India gives utmost importance to its relationship with the Maldives. We want to have a strong partnership with each other, adding that it is "willing to help in every way possible."

"May the friendship between India and Maldives last forever," PM Modi added.

During the address, he reiterated the Indian government's "Neighbourhood First" policy and stressed on the "high importance" that India attaches to its relationship with the Maldives.

The two leaders reaffirmed their "unequivocal and uncompromising position against terrorism in all its forms and manifestations, both within the region and elsewhere."

India and Maldives have agreed to set up a Joint Working Group on counter-terrorism, countering violent extremism and de-radicalisation.

India will support the conservation of Friday mosque (Hukuru Miskiy), which was built using Coral in Addu and to boost connectivity between the countries a passenger-cum-cargo ferry service will be launched between Kochi in India to Kulhudhuffushi and Malé in the Maldives.

The composite training centre was requested by the Maldives to provide a central training facility to its forces. The coastal surveillance radar will have 10 autonomous radar systems across the country & will help Malé monitor white shipping and preserve its sovereignty in EEZ or exclusive economic zone.

Six MoUs between the 2 countries, including in Hydrography, Health, Customs, Establishment of Passenger and Cargo Services by Sea, training of civil servants and Sharing White Shipping Information between the Indian Navy and the Maldives National Defence Force

PM Modi arrived in the country on Saturday afternoon and was received at the airport by Foreign minister of Maldives Abdulla Shahid and Indian envoy to the country Sanjay Sudhir. This is his first foreign visit abroad in his second term. He was later accorded ceremonial reception at capital's Male's Republic square, followed by a bilateral meet with President of Ibrahim Mohamed Solih.