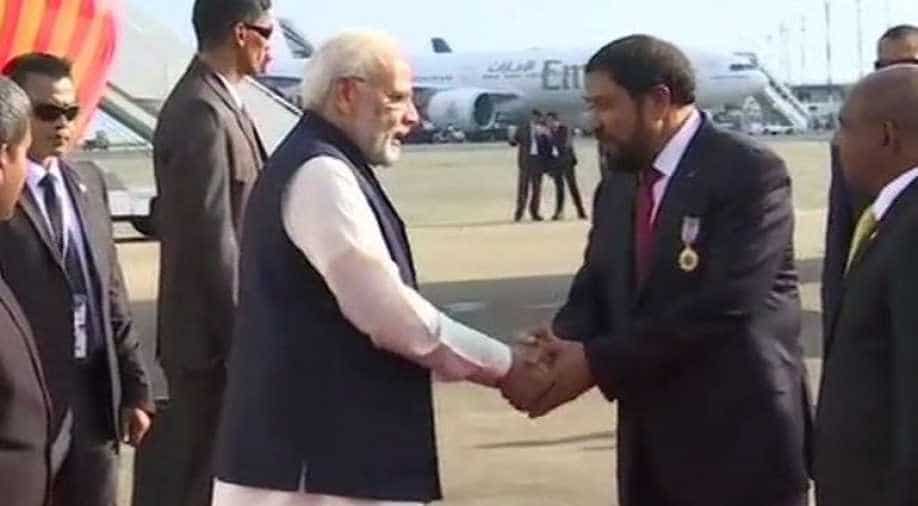 The Maldives is the only South Asian Association for Regional Cooperation SAARC country that Modi has not visited. His visit to the Maldives, a strategically vital island and a popular tourist destination, was cancelled in March 2015 due to the volatile political situation then.

This is Modi's first visit to the Maldives as prime minister. The last visit by an Indian Prime Minister to the Indian Ocean island nation was by Manmohan Singh in 2011.

"I will convey to the new Maldivian Government of Mr Solih the desire of the Indian Government to work closely for realisation of their developmental priorities, especially in areas of infrastructure, health care, connectivity & human resource development," Modi said in a series of tweets ahead of the visit.

He said the recent elections in the Maldives represent the collective aspirations of the people for democracy, rule of law and a prosperous future.

"We in India strongly desire to see a stable, democratic, prosperous and peaceful Republic of Maldives," the prime minister said.

Modi also congratulated Solih on his victory in the recent elections and wished him "the very best for his tenure".

"India and the Maldives share a strong partnership rooted in history, strong bonds between our peoples, and their shared aspiration for peace and prosperity. My Government's vision of inclusive development "Sabka Saath, Sabka Vikaas' extends to all our neighbours too," he said.

Modi also said he will convey to Solih his wish to work with the new Maldives government in different areas to boost bilateral ties.

Prime Minsiter Narendra Modi arrives in Malé. PM Modi is on a visit to Maldives to attend the inauguration ceremony of the President-elect Ibrahim Mohamed Solih in Malé. pic.twitter.com/IQPUZ4dVAI

Solih, the opposition Maldivian Democratic Party's candidate who surprisingly emerged victorious over incumbent president Yameen in the election held on September 23, had extended the invitation during a phone call by Modi.

The Maldives is the only South Asian Association for Regional Cooperation SAARC country that Modi has not visited. His visit to the Maldives, a strategically vital island and a popular tourist destination, was cancelled in March 2015 due to the volatile political situation then.

India-Maldives ties came under strain under Yameen who was perceived to be close to China. Some decisions by Yameen including imposition of restrictions on work visas for Indians and signing of a new Free Trade Agreement with Beijing also did not go down well with New Delhi.

Relations between India and the Maldives deteriorated further after Yameen imposed emergency on February 5 this year. India had criticised his decision and asked his government to restore the credibility of the electoral and political process by releasing political prisoners. The emergency lasted for 45 days.