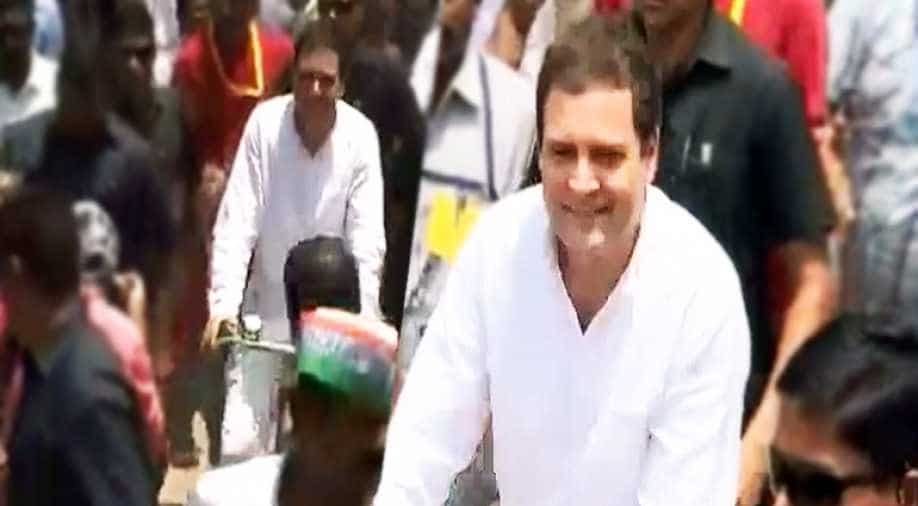 Congress president Rahul Gandhi speaks during his roadshow at Malur in Kolar district in Karnataka. Photograph:(PTI)
Follow Us

He accused the NDA government of ignoring farmers while waiving the loans of "15 richest people" in the country.

Gandhi, who was addressing a rally of farmers and tribal people at Sitapur in Chhattisgarh, promised a farm loan waiver across the country if the Congress returned to power in 2019.

"The UPA government ran MNREGA scheme at a cost of Rs 35,000 core. The same amount was stolen by (jeweller and PNB scam accused) Nirav Modi from the farmers of the country. The entire money of MNREGA was stolen by a single man, but our prime minister did not utter a single word," he said.

"The PM had known Nirav Modi and (the scam co-accused) Mehul Choksi. It was years-old relation," Gandhi alleged.

Farmers wanted loan waiver because the BJP government was giving them neither the minimum support price nor bonus, he said, adding that even the crop insurance scheme was not working.

"The Centre waived the loans of industrialists, but is not ready to take any step for farmers," Gandhi said.

When the Congress government is voted to power in 2019, it will waive loans of farmers in the entire country within 10 days of coming to power, he asserted.

Food processing plants will be set up and farmers will be ensured good returns on their produce, the Congress president said.

"When prime minister Modi was campaigning in 2014, he had promised to provide jobs to two crore youths every year, to deposit Rs 15 lakh in bank accounts of people and provide handsome returns to farmers on their produce. But nothing has happened. Forget Rs 15 lakh, not even Rs 15 have been deposited in any account," Gandhi said.

"When the UPA was in power, minimum support price was increased by 15 per cent every year. But during the NDA regime it wasn't hiked by even five per cent," he said.

"Unemployment is rising. Farmers are committing suicide. Dalits and tribals are being attacked and facing repression. When nobody is benefiting from this government, who is getting the benefit?" he asked.

Gandhi said he had personally met Modi and asked him to waive crop loans, but the prime minister did not give any reply.

"For whom this BJP and RSS machinery is working? I will give you an example -- farmers in the entire country wanted to get their loans waived, but the government ignored them and Rs 2.5 lakh crore worth of loans of the 15 richest people were waived," Gandhi alleged.

Referring to the press conference held by senior-most Supreme Court judges on issues related to the apex court earlier this year, Gandhi said, "The BJP-led NDA government has snatched the rights of judges. Where will people get justice when Supreme Court judges themselves are asking for justice from people?"

The Congress would form government in Chhattisgarh by defeating the ruling BJP in the coming elections, he said.

While demonetisation led to job losses, small traders had to bear the brunt of "Gabbar Singh Tax", he said, referring to the Goods and Services Tax (GST).

Farmers, youths, tribals and small traders in the state will benefit from the Congress government's policies, he said.

Speaking at Kotmi in Bilaspur district later in the evening, Gandhi took a jibe at the prime minister's 'Mann ki Baat' radio programme.

The Congress president, who arrived on a two-day tour of Chhattisgarh today, addressed three public meetings during the day.