At least 15 dead, including pilot in plane crash at Kerala airport 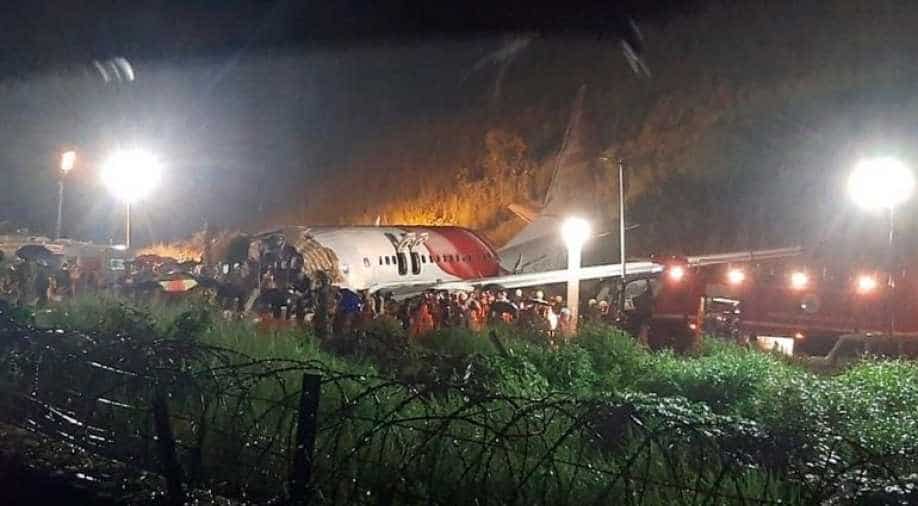 The wreckage of the crashed plane in Kerala Photograph:( PTI )

As many as 15 people died as Air India Express plane skidded and broke into two during landing at Kozhikode airport in southern Indian state of Kerala.

Kerala DGP confirmed that 15 people died in the tragic accident.

An official said Air India Express flight IX 1344 operated by B737 took off from Dubai and was heading towards Calicut when this incident happened, adding that there were 191 people in the aircraft, including the cabin crew and pilots.

#BREAKING | Dubai-Calicut Air India aircraft skids off the runway after landing at Calicut airport. Ambulances have been deployed for rescue operations. @palkisu gets you the first visuals pic.twitter.com/ig4OXvZ4Jo

Prime Minister Narendra Modi expressed his condolences to the ones who lost their loved ones in the incident.

Pained by the plane accident in Kozhikode. My thoughts are with those who lost their loved ones. May the injured recover at the earliest. Spoke to Kerala CM @vijayanpinarayi Ji regarding the situation. Authorities are at the spot, providing all assistance to the affected.

He also said he talked to Kerala CM Pinarayi Vijayan, saying authorities have reached the spot and providing the assistance to the affected.

Distressed to learn about the tragic accident of Air India Express aircraft in Kozhikode, Kerala.

Have instructed NDRF to reach the site at the earliest and assist with the rescue operations.

Union Home Minister Amit Shah called the incident "tragic" in a tweet and said NDRF teams have been instructed at the earliest for the rescue operations.

As per the initial reports rescue operations are on and passengers are being taken to hospital: India's ministry of civil aviation pic.twitter.com/fXz3PGfCUm

Kerala CM also spoke on the unfortunate incident, saying the officials have been ordered to carry out rescue and relief work on an urgent basis.

Have instructed Police and Fire Force to take urgent action in the wake of the plane crash at the Kozhikode International airport (CCJ) in Karipur. Have also directed the officials to make necessary arrangements for rescue and medical support.