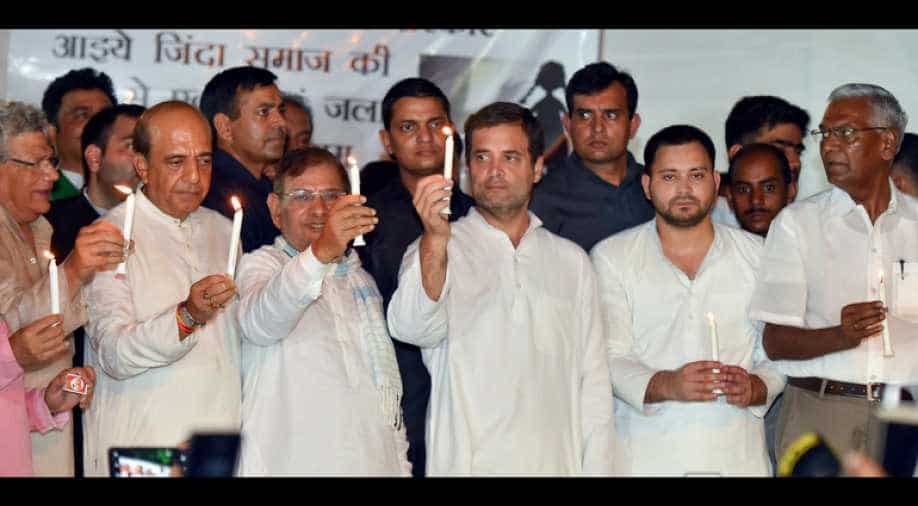 From left to right: Sitaram Yechury of the CPI(M), the TMC's Dinesh Trivedi, Sharad Yadav of the JD(U), Congress President Rahul Gandhi, and the CPI's D Raja at an opposition rally in Delhi. Photograph:( PTI )

Under fire from the opposition over the Muzaffarpur shelter home rape case, the Janta Dal (United) asserted today that Chief Minister Nitish Kumar would not resign and said it was ready for a Supreme Court-monitored probe into it.

He also rejected the demand for Kumar's resignation. It was a "friendship day" of parties seeking "political mileage" from the "unfortunate and shameful" incident in the state, he said.

"How can rape of young girls which has shamed us could be an issue for opposition parties to unite against the NDA government and the Nitish Kumar-led government in Bihar and demand his resignation. This politics over hapless victims in Bihar is the most unfortunate thing," Tyagi was quoted as saying in a press conference in Delhi.

Tyagi asserted that despite the opposition's demand, Kumar would never step down as the chief minister of Bihar and challenged them to unseat him in the Assembly.

"Nitish is a sensitive person and felt ashamed over the incident which the opposition parties are trying to use to hit at his conscience so that he steps down. But, he will never step down, we will not let him do so," he said.

He also condemned Sitaram Yechury and D Raja who he alleged have forgotten the killings of JNU president Chandra Shekhar and Purnia MLA Ajit Sarkar and joined the protest organised by RJD," he said.